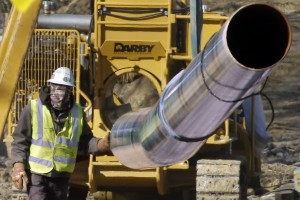 A worker shields his face against temperatures in the teens as he guides a section of pipe while working on a shale gas pipe line Friday, Feb. 13, 2015, in Zelienople, Pa.

A Pennsylvania judge this week handed Sunoco Logistics its first court victory in a battle to assert eminent domain over privately owned land where it plans to build its cross-state Mariner East 2 pipeline.

Judge Edward Guido of the Cumberland County Court of Common Pleas rejected arguments by six local landowners that Sunoco has no right to locate the pipeline on their land because it does not qualify as an intrastate pipeline that would allow the company to assert eminent domain.

The plaintiffs, represented by attorney Mike Faherty, said that since the proposed $2.5 billion pipeline runs into both Ohio and West Virginia, it is actually an interstate pipeline that would be regulated by the Federal Energy Regulatory Commission rather than the PUC so would not therefore be entitled to public utility corporation status.

Faherty, who represents about 20 other landowners contesting Sunoco’s eminent domain actions, won an earlier case in the York County, Loper vs Sunoco, in which a judge ruled that Mariner East 2 was an interstate pipeline because it crossed state lines and contained no facilities for the offloading of petroleum products.

But the pipeline, referred to as ME2, now qualifies as both an interstate and intrastate line because of changes that Sunoco has made since the York County ruling, Judge Guido said.

“Since that decision, [the company] has reconfigured ME2 to be both an interstate pipeline as well as an intrastate pipeline subject to PUC regulation,” Judge Guido wrote in a three-paragraph explanation of his Sept. 29 order overruling the plaintiffs’ objections.

Jeff Shields, a spokeman for Sunoco, welcomed the judge’s decision but said eminent domain remains a last resort in finding land for the 350-mile pipeline that would carry natural gas liquids from western Pennsylvania’s Marcellus Shale to a processing plant at Marcus Hook on the Pennsylvania-Delaware border near Philadelphia.

“We do not view the need to resort to eminent domain as a positive outcome,” Shields said in a statement. “We are confident that our negotiations with landowners will continue to produce agreements that are acceptable to all parties and to avoid the condemnation process wherever possible.”

Shields said the company added four “offtake points” within Pennsylvania along the pipeline route since the York County ruling in February 2014 because of market demand for propane and not because of any intention to meet the requirements of an intrastate pipeline.

Although the courts have previously recognized Sunoco’s status as a public utility corporation for the purposes of conducting surveys, the Cumberland County ruling is the first to support its right to eminent domain for the purposes of building the pipeline, Shields said.

He declined to say how many eminent domain cases Sunoco is pursuing but said the pipeline would eventually be built on about 2,500 parcels across the state.

Faherty said in response to the ruling that he will recommend to his clients an appeal to the Commonwealth Court.

He said the company can apply to the PUC for certification of its plan to carry natural gas liquids from west to east across Pennsylvania, and that might give it public utility status but until that happens, Mariner East 2 is not subject to PUC regulation.

“I think the judge was in error in indicating that they are now regulated by the PUC,” he said.

Faherty reiterated that, as a pipeline that crosses state lines, Mariner East 2 is an interstate pipeline that cannot be regulated by the PUC because the commission does not have jurisdiction over interstate commerce.

The conflict between the York and Cumberland County rulings suggests that the legal status of Mariner East 2 will eventually be decided by a higher court, said Faherty, who is due to argue a similar case in a Washington County trial on Oct. 14.

“I believe it’s not settled,” Faherty said. “Judge Guido disagreed with the Loper decision and that ultimately it will be the appellate courts that decide the issue.”