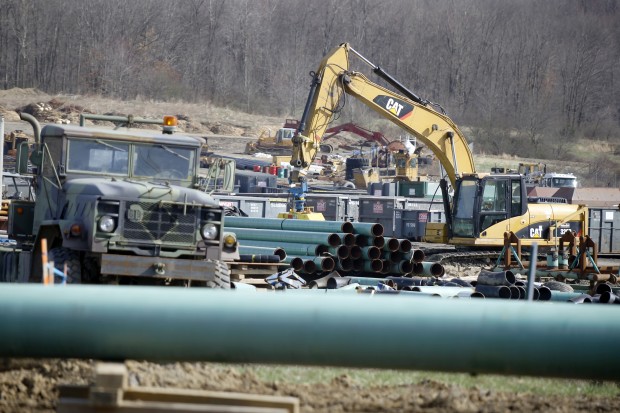 In this Thursday, April 17, 2014 photo, workers continue the construction at a gas pipeline site in Harmony, Pa.

Natural gas industry executives on Wednesday renewed calls for investment in new pipelines to carry abundant gas and liquids from the Marcellus and Utica Shales to southeastern Pennsylvania where they would be processed, exported, and used to attract a new generation of manufacturers.

At the annual Shale Insight conference of the state’s gas industry leaders, officials urged a sharp increase in pipeline capacity, which they said would enable the creation of a so-called “energy hub” in Philadelphia where an influx of cheap, plentiful gas would attract manufacturers and spark an economic resurgence in the region.

Speakers also called on manufacturers and other heavy energy users to consider Philadelphia as a location where a newly plentiful supply of gas would be available in addition to a skilled workforce, brownfield sites, good transportation links to the Northeast, and port access to export markets.

“A chicken and egg problem”

While energy hub backers are actively pursuing investors, they are hindered by potential backers of new pipelines reluctant to commit without an assurance of long-term demand. Possible buyers of the fuel need to be confident of supply before agreeing to set up in the Philadelphia area.

Barnett said some 85 percent of PECO’s gas now comes from the Marcellus Shale, up from almost none only five years ago, and that low prices resulting from Pennsylvania’s huge reserves of shale gas have saved the typical customer $1,000 a year. He forecast continued low prices amid successive upward revisions of the state’s reserves.

“It looks like it’s going to be inexpensive for the foreseeable future,” he said.

PECO spokesman Greg Smore said after the conference that the price of purchased gas has dropped from $10 per million BTUs in 2008 to about $3.50 now, saving residential customers, on average, $600 a year.

Consumers have made further savings because of a decline in retail electricity prices resulting from cheaper gas used for power generation, Smore said.

Despite PECO’s increased use of locally produced gas, much of it is coming to Delaware Valley users after being pumped from Pennsylvania via Texas or Oklahoma on existing pipelines, noted Lisa Crutchfield, senior vice president of advocacy and public affairs at the Greater Philadelphia Chamber of Commerce.

She argued that the team needs to attract heavy energy users to win the backing of lawmakers and to persuade the environmental community that the energy hub is a beneficial concept. The team expects to publish a report on its progress in December.

James O’Toole, an attorney who is heading a needs assessment as part of the team’s effort, said the energy hub is based on the idea that low energy prices will attract businesses to Philadelphia. He argued that the idea has already taken root in the local business community and that additional investment is now needed to make it a reality.

But one sign of its viability, O’Toole said, is the existence of Sunoco Logistics’ Mariner East project, whose second phase would carry natural gas liquids to Marcus Hook near Philadelphia from western Pennsylvania, Ohio and West Virginia.

As industry leaders seek increased investment in the energy hub concept, four pipelines that would transmit dry gas or liquids across Pennsylvania are at different stages of development, said Robert Powelson, a member of the Pennsylvania Public Utility Commission and a former member of the Energy Action Team.

At Philadelphia Energy Solutions, the company refines 20 percent of the crude oil produced by North Dakota’s Bakken Shale, and that operation represents the first phase of its operation. Next comes the processing of dry gas from the Marcellus Shale but that depends on pipelines to carry it from northern and central Pennsylvania, he said.

Meanwhile, environmentalists protesting the conference outside the Pennsylvania Convention Center attacked the energy hub concept, saying it reinforced the use of fossil fuels at a time when policymakers are seeking to cut greenhouse gases.

A handful of protestors sought to draw support from the Pope’s imminent visit to Philadelphia, saying his recent call for more action to curb climate change was at odds with the industry’s plans to build an energy hub in Philadelphia.

“It sends the message to the gas industry that climate change is a moral issue and that there is no such thing as safe fracking,” said Elizabeth Arnold, a co-founder of the environmental group EDGE, or Emerging Development of the Green Economy.

This story has been updated to include an explanation of how lower gas prices are affecting PECO customers.