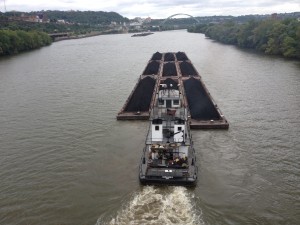 A coal barge along the Monongahela River in Pittsburgh.

Alpha Natural Resources did not say what impact the bankruptcy would have on its current operations.

The filing was made “to enhance the company’s future as it weathers a historically challenged coal market” according to a statement on the company’s web site. Trading of the company’s stock was suspended in July by the New York Stock Exchange.

The company owns Cumberland Mine and Emerald Mine, both in Greene County. Emerald Mine is slated to close this year but is still operating.

Edward Yankovich, International Vice President of the United Mine Workers of America District 2, which represents miners at both mines, said he didn’t know what the bankruptcy would mean for workers at the mines.

“What they’re going to request in bankruptcy, we have no idea,” said Yankovich. “This is going to be a process that’s going to work its way out. The court is going to have to determine whether they legitimately belong in bankruptcy or not.”

In the meantime, the company still has a contract with the UMWA and the union will “do everything in our efforts to ensure the terms and conditions of this current agreement have moved forward,” Yankovich said.

The company said it was seeking bankruptcy protection “to allow normal business operations to continue uninterrupted while in Chapter 11,” according to its statement.

State Rep. Pam Snyder (D-Greene County) said she’s been in conversation with representatives with the company and that she was hopeful the mines would continue to operate.

“That’s what I’m being told, that the operations will continue, so we’ll see,” Snyder said.

Alpha CEO Kevin Crutchfield said in a statement  the industry has seen “an unprecedented period of distress” because of competition from cheap natural gas, oversupply of coal, low prices for coal, and increasing amounts of government regulation “that has pushed electric utilities to transition away from coal-fired power plants.”

Natural gas fired generation became the largest source of the nation’s power for the first time in April.

The announcement comes weeks after layoffs were announced at Consol Energy, which is cutting 470 jobs, including 180 in its coal mining operations in Pennsylvania.

Coal-fired electricity has dropped from 49 percent of the U.S. electric grid in 2008 to 36 percent this year.