As gas boom cuts into forests, scientists study how to put it back together | StateImpact Pennsylvania Skip Navigation

As gas boom cuts into forests, scientists study how to put it back together 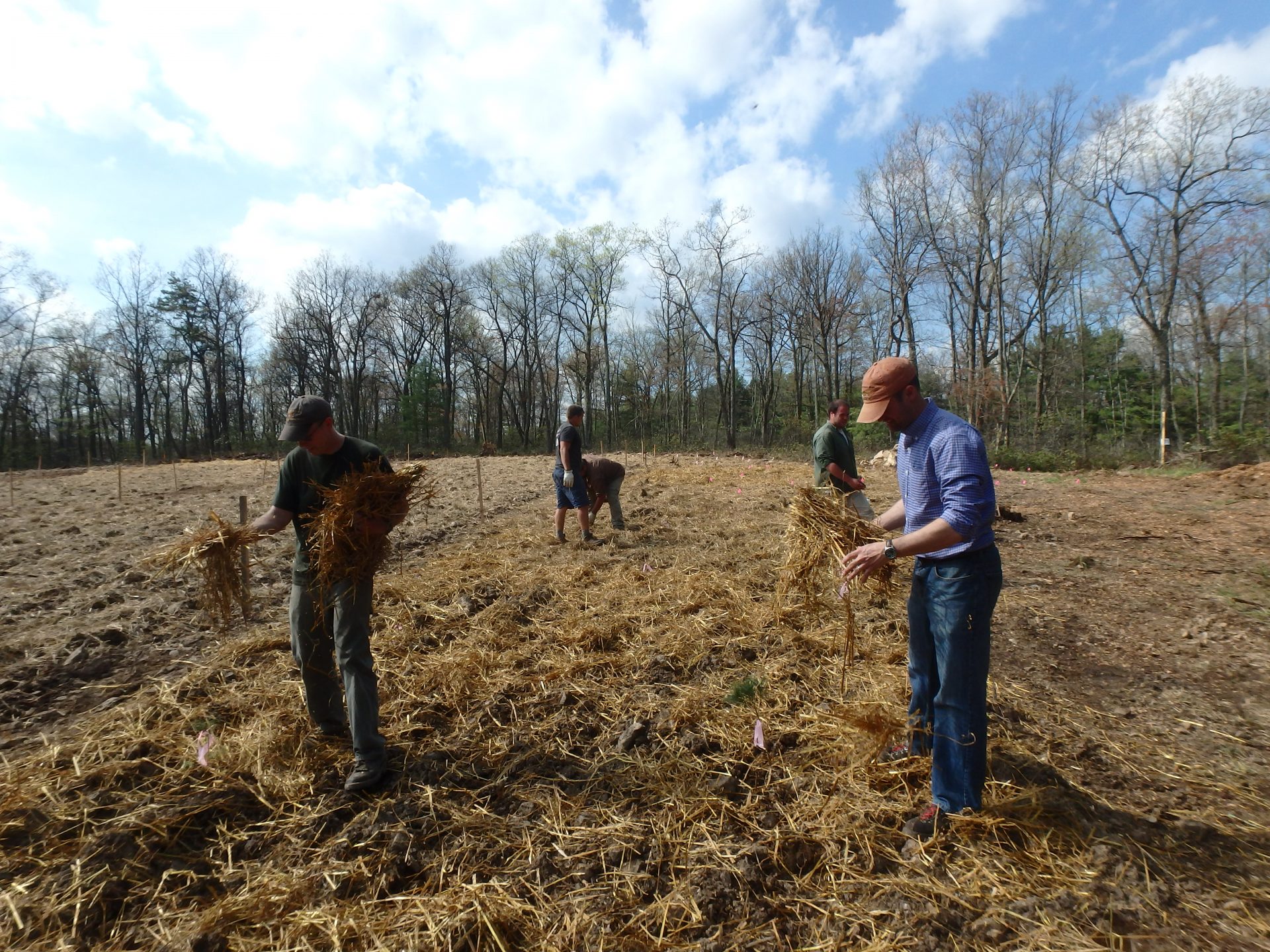 Researchers from Penn State University and the state Department of Conservation and Natural Resources have created a mock wellpad to study ways to reclaim forest land disturbed by gas development. 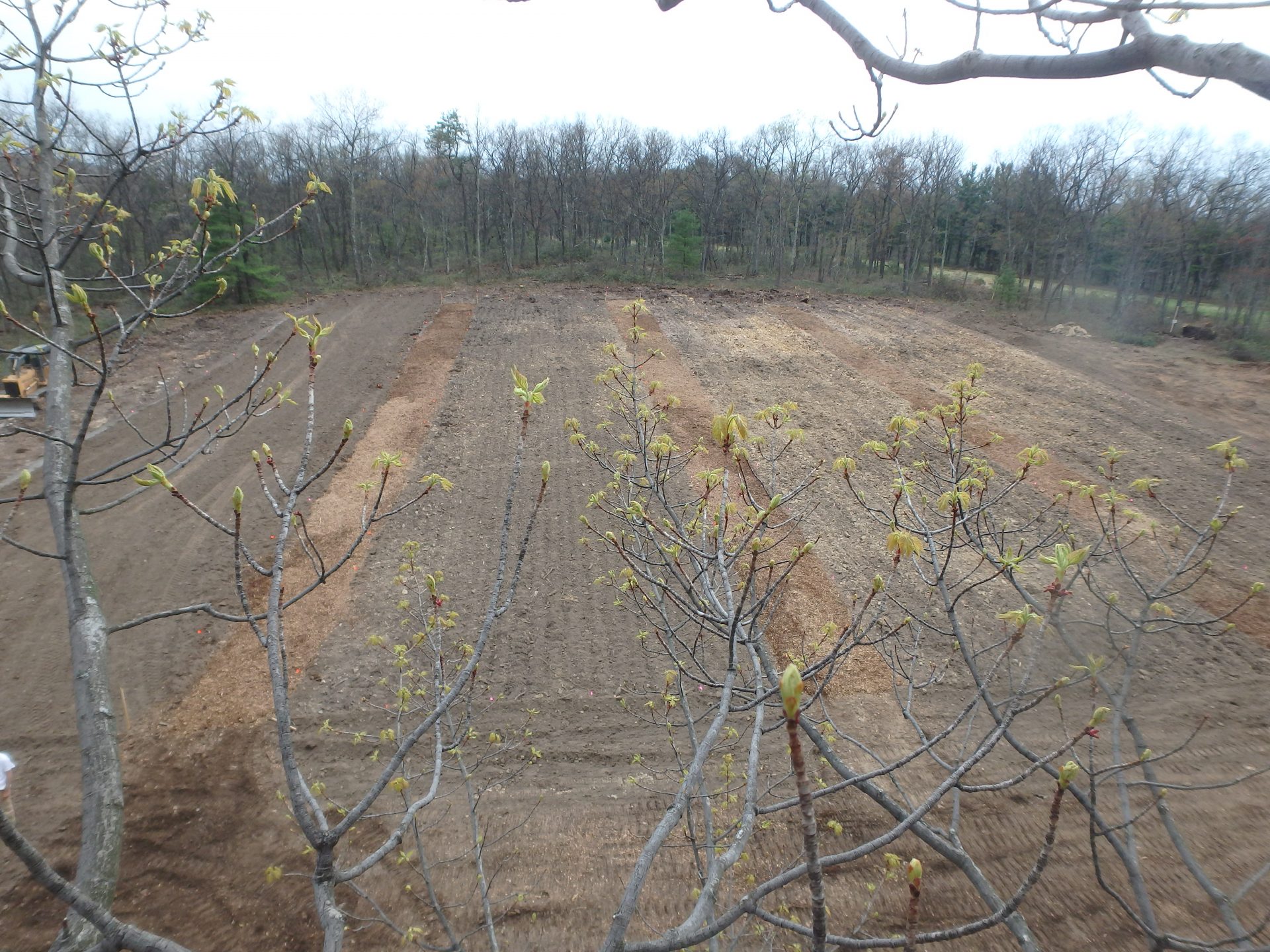 The study looks at four reclamation techniques. On the far left, rocks and compacted soil are left in place, with some topsoil. On the far right, 20 inches furrows have been dug to loosen the soil, and topsoil has been added. 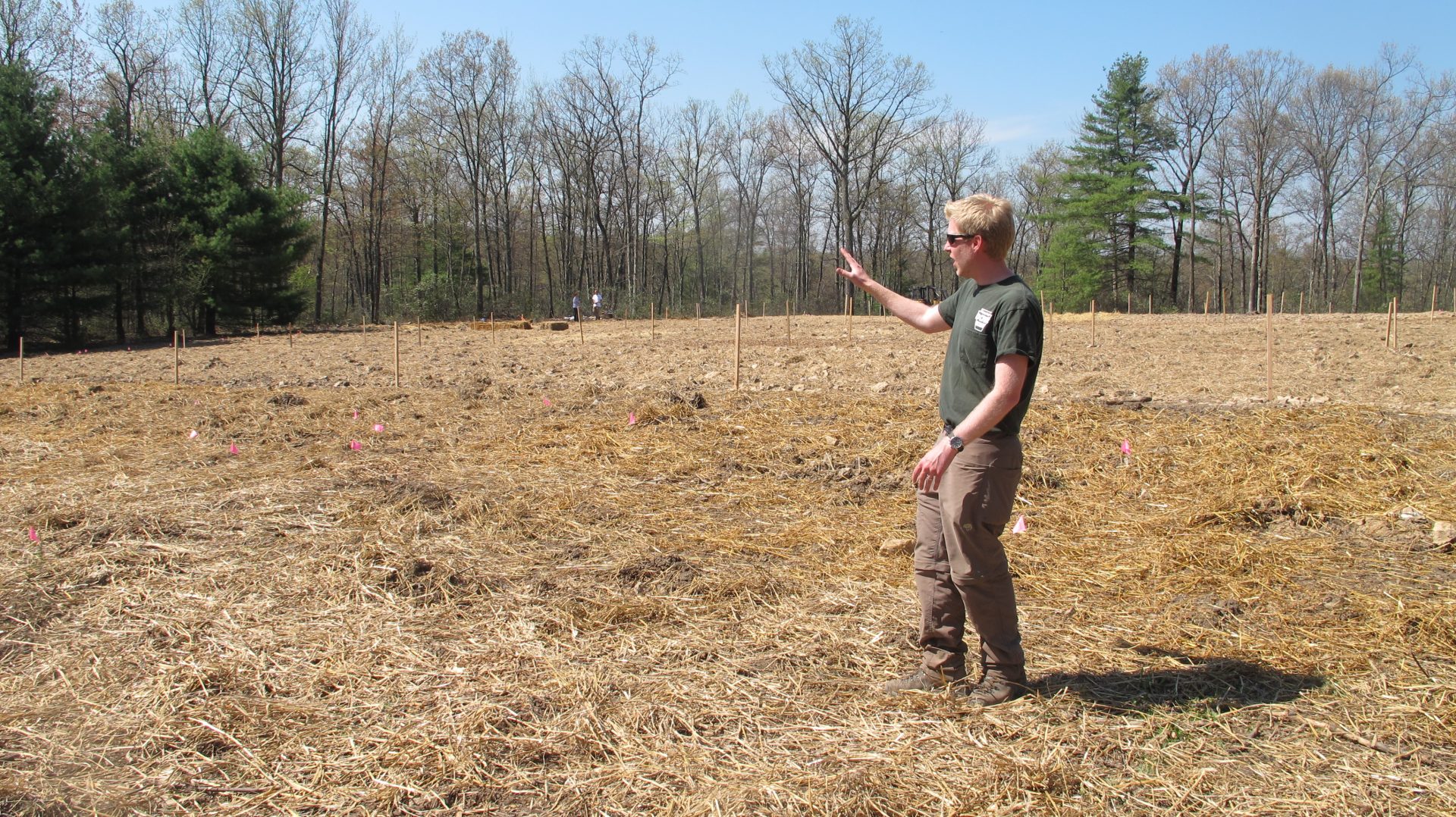 DCNR botanist Kelly Sitch looks out over the one-acre test site. Most wellpads are about five acres. 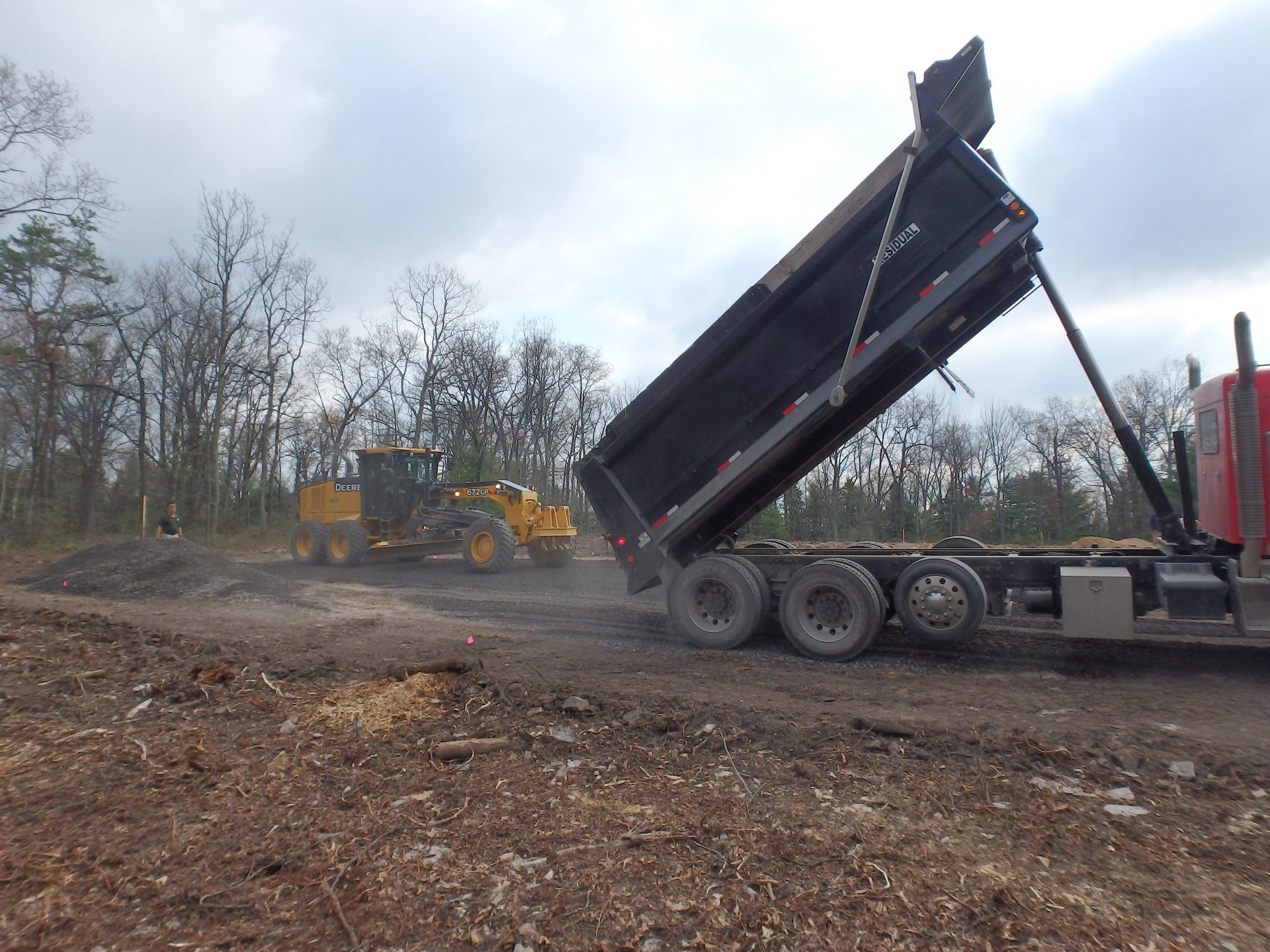 The research team spent about $4,000 on materials, and trucked in topsoil to simulate reclamation techniques. 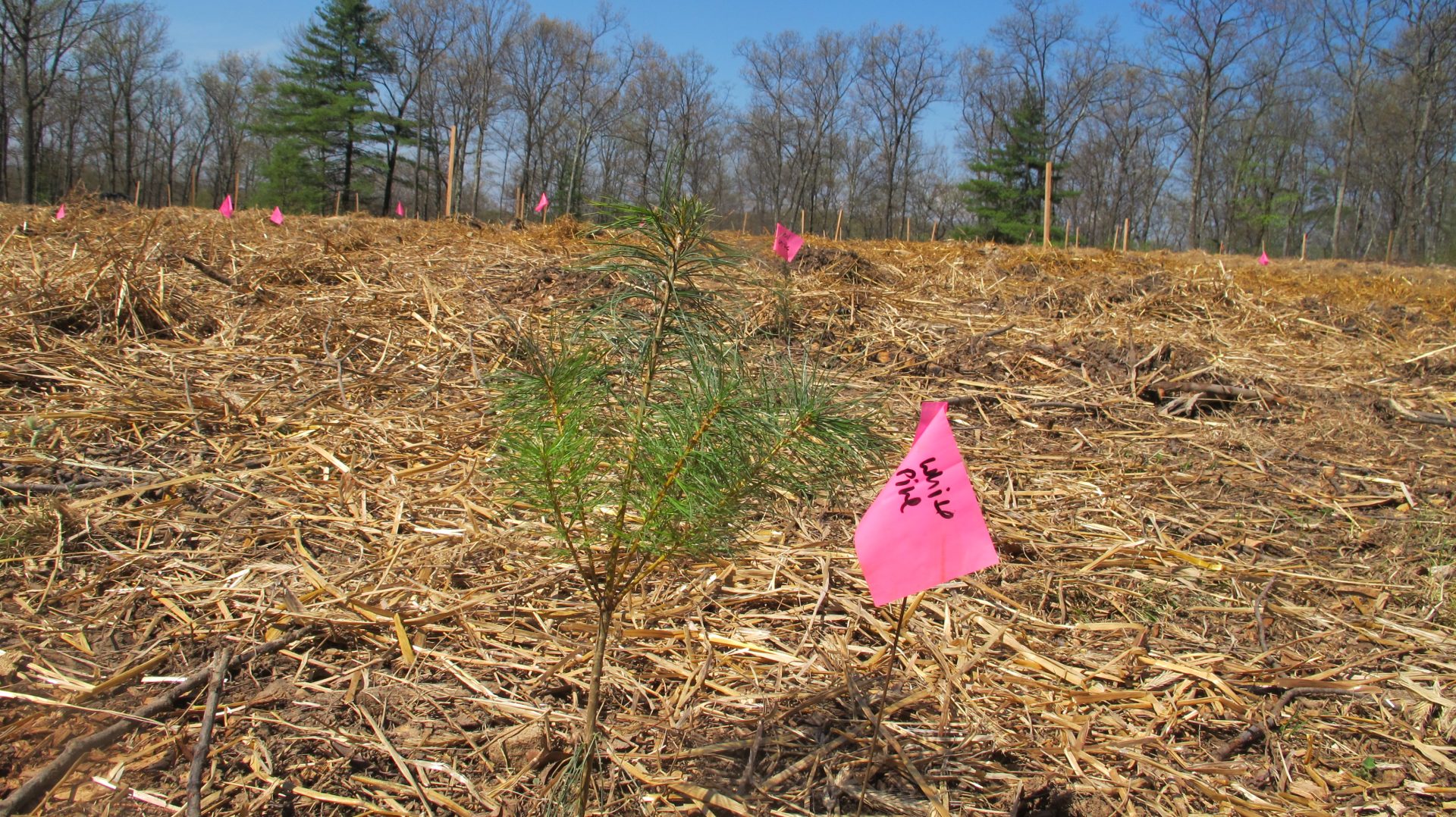 Saplings were planted along the edges of the site to simulate interim reclamation steps that can be taken by gas companies.

In the seven years since Marcellus Shale gas companies began working in Pennsylvania’s state forests, none of the nearly 1,700 affected acres has been fully restored and put back the way it was before drilling began.

Now state foresters and Penn State scientists are trying to plan for the future and help gas companies figure out the best ways to clean up after themselves.

Kelly Sitch spends a lot of time in the woods, keeping an eye on how gas development is changing the landscape. As a botanist with the state Department of Conservation and Natural Resources, his latest project is studying a one-acre plot of land in the Tiadaghton State Forest.

“We are building a mock wellpad to test different soil and ecological restoration techniques,” he says. “We want to go from a wellpad that is non-forest, to a reclaimed site, where we’re restoring ecosystem function.”

This clearing in the forest is a scaled-down version of what would likely be left after a gas company has brought in the big drilling rig, finished up the fracking, and put the wells into production.

The trees are gone, the soil is compacted, and there are lots of rocks lying around.

“We’re loosening up some soil and planting seedlings in the area surrounding this pad,” says DCNR forester Ben Gamble. “There are a lot of stones, and some of the soils are mixed.”

The research team is trying out four different reclamation techniques. On one end of the spectrum, they left the compacted rocks and soil, then added some topsoil. On the other end, they dug furrows nearly two feet down to loosen things up and added topsoil. They’ve planted various grasses, legumes, and wildflowers on top– with trees and shrubs around the edges.

Penn State University senior Bill Wall is among a group of students helping out.

“At Penn State, you learn a lot about the Chesapeake Bay and fracking,” he says. “But I’ve never been to a fracking pad. It’s pretty eye-opening–the fragmentation that occurs with the infrastructure that goes into developing natural gas.”

Of the nearly 200 wellpads in state forests, only about 5 percent have been partially reclaimed—meaning some equipment has been removed and perhaps grasses, shrubs, or tress have been planted.  So far none of the Marcellus sites in state forests have been fully restored to the way they were before the gas companies arrived.

Sitch says that’s largely because they’re still in use.

“The fact that we haven’t seen a lot of reclamation and restoration yet isn’t a concern,” he says. “We want this site to be a number of years ahead, so we can do that work better.”

Patrick Drohan teaches ecosystem science at Penn State’s College of Agricultural Science. He’s leading the research, with a grant from DCNR. He hopes to find best practices companies can use now– in the interim– before they need to leave altogether and fully restore the sites.

“What we’re trying to do here is show that if you go a couple of extra steps–by alleviating that compaction and diversifying your plantings– you can greatly improve that status quo,” says Drohan. “So this can be used now.”

Replicating this work on a typical five-acre wellpad would take about five to six hours, according to Drohan. The team spent about $4,000 on equipment.

“In the big picture of a pad, that’s nothing,” he says.

Gas development is just the latest challenge for DCNR’s foresters.They’re charged with balancing conversation efforts, and making use of natural resources—whether it’s timber, oil, or gas.

“In my mind, this is just a new part of our mission to restore Pennsylvania forests,” says Sitch. “It’s a little bit more complex. It’s a little bit different than what we learned in ecology or forestry school, but it falls along those same lines.”

Although Governor Wolf recently reinstated a moratorium on leasing state land for gas drilling, nearly a third of Pennsylvania’s 2.2 million acres of state forest land is already available for oil and gas development– either because of pre-existing leases, or because the state does not own the mineral rights.

The research team will be watching this patch of land for a long time, to see which techniques work best. It could be decades, or even generations until the state’s forests are fully restored from Marcellus development.