EPA hearings put Pittsburgh in the crosshairs of climate war 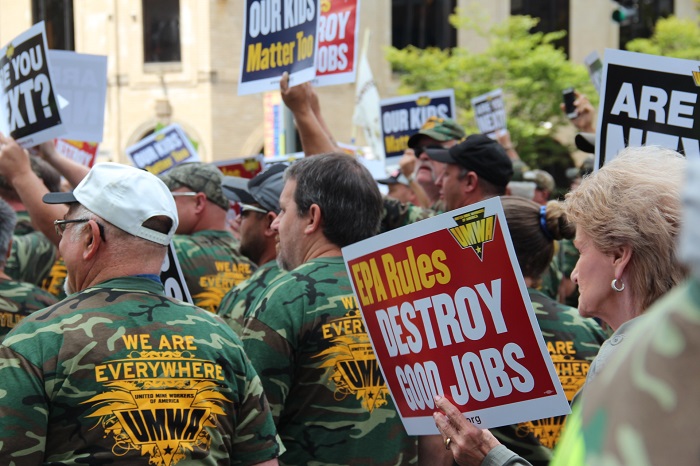 Pro-coal protestors outside the hearing fear the CO2 regulations will hurt their jobs. 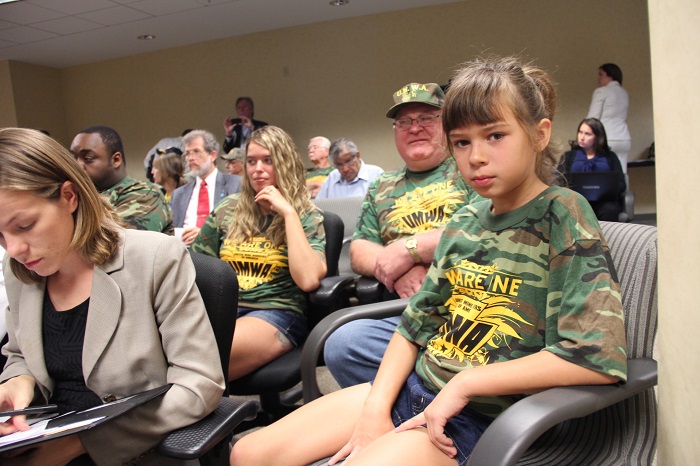 Both pro-coal and supporters of the proposed CO2 regulations gather for the hearing in Pittsburgh. 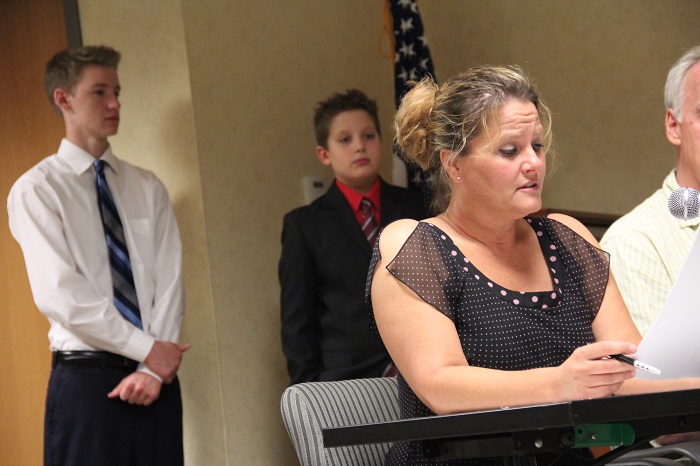 Julie Franks of Butler County, PA brought her sons who have asthma along for her pro-EPA testimony.


Note: This story is from The Allegheny Front, a public radio program covering environmental issues in Western Pennsylvania.

The U.S. Environmental Protection Agency held hearings today in Pittsburgh on a proposed rule to slash greenhouse gas emissions from power plants. The plan is up against serious opposition from the coal industry, but environmental groups say it doesn’t go far enough.
Competing rallies for and against the EPA’s proposed carbon rules crossed paths in Downtown Pittsburgh today.
“No planet, no jobs!” shouted those who supported the EPA proposal.
“U-M-W-A!” chanted the United Mineworkers of America and their supporters.
Mark Sunyak, 54, of Fayette County, Pennsylvania, is a retired mineworker who came to protest the rule. He said it threatened his community.
“Our jobs, our security, our families,” Sunyak said when asked why he was there. “I’m a recent retiree, my benefits may be in jeopardy.”
About three-quarters of all carbon dioxide emissions in the power sector come from burning coal. The EPA is trying to cut emissions from electric power plants by 30 percent of 2005 levels by the year 2030. The EPA’s own analysis shows that under the plan, coal production in Appalachia would decline. But it said other energy sectors would grow, and the overall economy would benefit.
Inside the hearings, the voices of coal were evident. Cindy Frich, a state legislator from Morgantown, West Virginia, was one of them.
“I have to admit I feel these rules are existential threat to my state,” Frich said. “We’re already having problems with our state budget. I really see problems ahead if these rules are implemented.”
Frich said she worried that coal companies would be forced into bankruptcy. And those companies pay into federal programs to clean up from legacy coal mining issues.
“If you don’t have any mines left, who’s going to be paying for that cleanup?” she asked.
Natalie Tennant, West Virginia’s Secretary of State, said the federal government needs to invest more in carbon capture and sequestration in order to keep coal jobs in West Virginia.
“We are not asking for any handouts,” Tennant said. “We simply want to use what we have to earn a living.”
Under the EPA plan, states would come up with their own plan to cut down on CO2. They could increase use of nuclear energy, renewables, or natural gas. They can also improve energy efficiency in power plants in homes and businesses.
Inside the hearings, some made a moral case for curbing carbon emissions. Scientists say carbon dioxide from burning fossil fuels is causing global warming.
The Rev. Bill Thwing, with the group Creation Care Partners, said politicians and scientists have known about climate change for decades.
“But they have chosen to do nothing about it except talk, and research, and study, until now when it is almost too late,” Thwing said.
The EPA has received over 300,000 comments on the plan, which is opposed by the utility industry. But environmental groups and public health groups are in favor of it. Scientists say global warming will increase the level of ground level ozone — which exacerbates asthma.
Julie Franks of Butler County, Pennsylvania, testified in favor of the rules. She brought her two sons who have asthma and have to spend much of the summer indoors.
“This one’s been in the ER tons and tons of times,” Franks said. “I can’t count how many times he’s been in the ER for asthmatic attacks.”
Franks said she feels for those who depend on coal. But she thinks the rules are necessary.
“We evolve — we’re supposed to evolve,” she said. “We’re supposed to evolve, and sadly, coal needs to evolve.”
The EPA’s deadline for a final version of the rule is June, 2015.