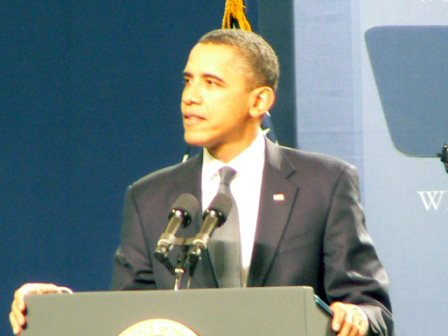 On February 3, 2011, President Obama traveled to State College to announce a new energy efficiency program. He wanted to lower commercial energy bills by $40 billion, and improve the country’s energy efficiency by twenty percent.
A year is a long time. The fact Obama gave a shout-out to former Penn State President Graham Spanier in the first minute of his speech is a testament to that. But twelve months after the president’s initial announcement, the legislative portion of his energy efficiency policy hasn’t advanced at all.
The plan was part of the broad “Win the Future” campaign Obama rolled out during his 2011 State of the Union address. Like he’s been doing the last two weeks,the president traveled around the country after last year’s speech to outline specific details of the policies he had asked Congress to pass.
The Penn State visit was focused on a topic Obama admitted sounds kind of boring: improving energy efficiency. “It may not sound too sexy,” he told the crowd, “But our homes and our businesses consume 40 percent of the energy we use. …It costs us billions of dollars in energy bills. They waste huge amounts of energy.”


Obama’s plan to lower the number was two-fold:  first, expand tax deductions for companies who improve their insulation, lighting systems and heating. “What we’re saying to people is if you’re willing to make your buildings more energy-efficient, we’ll provide new tax credits and financing opportunities for you to do so,” he said.
Watch President Obama’s 2011 speech:

The president also wanted to mirror the White House’s “Race To The Top” education program, and give federal grants to states and cities who strengthened their efficiency standards. “You show us the best ideas to change your game on the ground,” he promised state and local governments, “we’ll show you the money.”
But President Obama did not show anyone the money. Congress never approved the grants, which were part of the Department of Energy’s budget request.
Lowell Ungar directs policy at the Alliance To Save Energy. He tracked the White House proposals, and said Congress made it clear it wasn’t funding “Race To Green,” when it finally passed the Department of Energy’s budget in December. “One of the notes [legislators] put in was that they did not provide funding for a federal program to essentially influence state laws regarding commercial buildings,” Ungar explained.
Unger is disappointed the grants never happened. “A lot of the rules that determine building efficiency are set at the state level. By encouraging states to pay attention to this area and make some reforms, it could have really transformed much of the building market in the United States.”
Congress didn’t change the tax codes, either. The deduction currently in place is cumbersome, according to Unger, and difficult to apply for. Obama wanted to change the incentive to a credit, and expand its size.
Republican Glenn Thompson represents State College in the House of Representatives, and attended last year’s speech. He said he’s in favor of improving efficiency standards, but doesn’t want to do it through tax incentives. “This country is suffering under a tax code that is extremely too complex,” Thompson said. “It is so complex that, frankly, the only people that benefit from it are those who have enough personal resources to be able to afford an army of tax attorneys. And they can find all kinds of deductions.”
Thompson also opposed “Race to Green,” pointing out the 2009 federal stimulus package had already funded energy efficiency efforts. According to the White House, the American Recovery and Reinvestment Act directed $20 billion toward energy efficiency efforts. Since Republicans took control of the House, most of President Obama’s legislative agenda has ground to a halt. That’s what happened with his energy efficiency proposals.
But his “Better Buildings” effort isn’t completely dead. In December, the president announced he’ll require federal buildings to make $2 billion worth of energy efficiency upgrades. Obama also has the Treasury Department working to write new guidelines for the tax breaks.
And the White House, working alongside the Clinton Global Initiative, has received commitments from private companies, universities and other organizations from across the country to carry out energy efficiency overhauls at their own expense.
The White House framed the December announcement as part of its “We Can’t Wait” initiative – a series of executive orders meant to highlight policy areas where Congress hasn’t advanced bills the president supports.
President Obama hasn’t given up on the legislative portion of his Better Buildings plan, though. In fact, he mentioned it during this year’s State of the Union. “The easiest way to save money is to waste less energy,” he told Congress. “So here’s a proposal: help manufacturers eliminate energy waste in their factories and give businesses incentives to upgrade their buildings.
Lowell Ungar – from the Alliance To Save Energy – said he’s still optimistic. “Saving energy is kind of a sweet spot, where a lot of different organizations and companies and politicians can come together.
Still, Ungar acknowledged it will be pretty tough to get any sort of major bill passed, given the partisan gridlock in Washington.