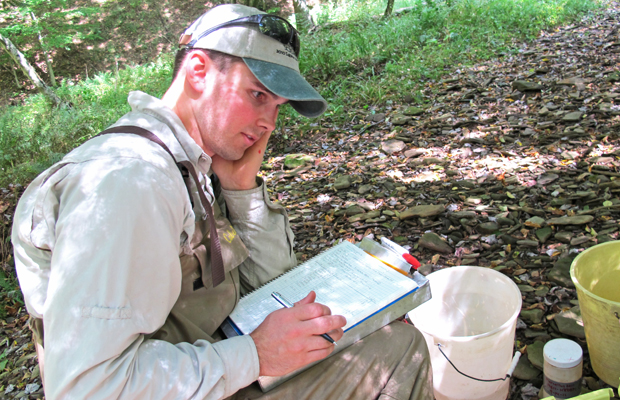 Picture a map of Pennsylvania. Now picture dots for every new natural gas well.  The dots cluster in the northeast near Scranton, and in southwest, near Pittsburgh. These are the areas that have experienced the greatest natural gas development over the past couple of years. No state rules regulate how many natural gas wells can be drilled within a specific area. But researchers at the Academy of Natural Sciences in Philadelphia want to know if heavy concentrations of these wells impact the environment.
Deep in the Susquehannock State Forest flows one of the headwaters of the Susquehanna river, a little stream about 3 to six feet wide running over gravel, surrounded by hemlocks, and wild flowers, and known as Horton Run. This is where the researchers, led by David Keller, start looking for fish.
“We’re expecting to see a brook trout, at least a few, we haven’t seen one yet. Oh, there we go, there he is, speak of the devil.”
Keller leads the team in counting and identifying salamanders, brook trout, crayfish and a tiny hammer-headed looking creature called slimy sculpin.
The team measures out one hundred meters of stream, and then put down nets on either end to trap any living creature swimming in the water at that moment. Then Keller puts on a large metal backpack he calls the “electrofish.”
The contraption, which sounds like a vacuum, puts a small charge into the water that slows down all the brook trout and crayfish long enough to be captured and put in a big bucket.
The study, which is funded in part by the William Penn Foundation, as well as by the Academy of Natural Sciences in Philadelphia, looks to see if drilling for natural gas has an effect on stream life, and if the water chemistry itself is impacted. Data is divided into three categories: sites near high density drilling, sites near medium-density drilling, and streams near no drilling activity.
Richard Horwitz is a senior biologist at the Academy’s Patrick Center for Environmental Research. Horwitz says the researchers want to see whether drilling done according to all the current rules has any impact on stream health.
“We are not accident chasing here,” says Horwitz. “[We are] not looking for wells that have a history of violations, not looking for a spill.”
He says the Academy has a 60-year history of looking at how industrial activity impacts streams. But Horwitz says studying gas drilling in Pennsylvania’s Marcellus Shale may be the most controversial research topic he’s seen.
Knowing how tricky the politics of gas drilling are, the study team doesn’t even tell the field researchers which category of stream they are collecting samples from on a given day.
So far, a preliminary study of just 9 streams has already shown a statistically significant difference in aquatic life between streams in areas of no drilling and streams where nearby wells are numerous. Jerry Mead is a senior biologist with the Academy, and a lead researcher on the study.
“As the density of well pads increased, the number of types of stream insects decreased.
Researchers also found higher levels of water pollutants in areas of high density drilling. But the pilot study was just a small snapshot. Researchers now aim to test more than 50 sites. The Academy of Natural Sciences prides itself on conducting applied research that can be used by regulators, lawmakers and concerned citizens.
Andrea Kreit is one of the researchers on the team.
“They’ve got all of these proposed drill sites and I mean its like an explosion of activity up here. So I think knowing at what densities you may or may not start to see effects in the streams, and the water and the fish, its important.”
Pennsylvania lawmakers and regulators don’t seem to be talking about the density of wells.  The Governor’s recent proposal to update natural gas drilling rules in the Marcellus Shale does not mention well spacing. It does, however, recommend increasing the buffer between a well site and streams, rivers and lakes from 100 to 300 feet.
Similarly, the Delaware River Basin Commission’s proposed rules do not include well density, but there are setback requirements for waterways.
Pennsylvania lawmakers and regulators don’t seem to be talking about the density of wells. The Governor’s recent Marcellus Shale Commission’s report spends few words on the spacing of wells, though it does recommend increasing the buffer zone between a well site and the waterways. There are recommendations to increase the buffer zone between where the wells are located and the waterways. And the Delaware River Basin Commission has also proposed increasing buffer zones.
Some activists want regulators to include limits on well density. Others say it’s more important to enact strict buffer zones.
Tracy Carluccio is with the Delaware Riverkeeper, an environmental watchdog which is lobbying the Delaware River Basin Commission to propose spacing requirements.
“Very few regulators have even thought about this. We think the lack of requirements in terms of spacing of gas wells is a huge oversight on the part of regulators. And it allows the industry to be in charge of that issue.”

The American Petroleum Institute recommends keeping wells away from sensitive surface waters if possible. John Felmy, a chief economist with API says the challenge is that the expansion of shale gas drilling in places like Pennsylvania is so new. And doing scientific research takes time.
By the time the researchers from the Academy of Natural Sciences conclude their study and publish their results at the end of 2012, hundreds, if not thousands of more wells may be drilled.