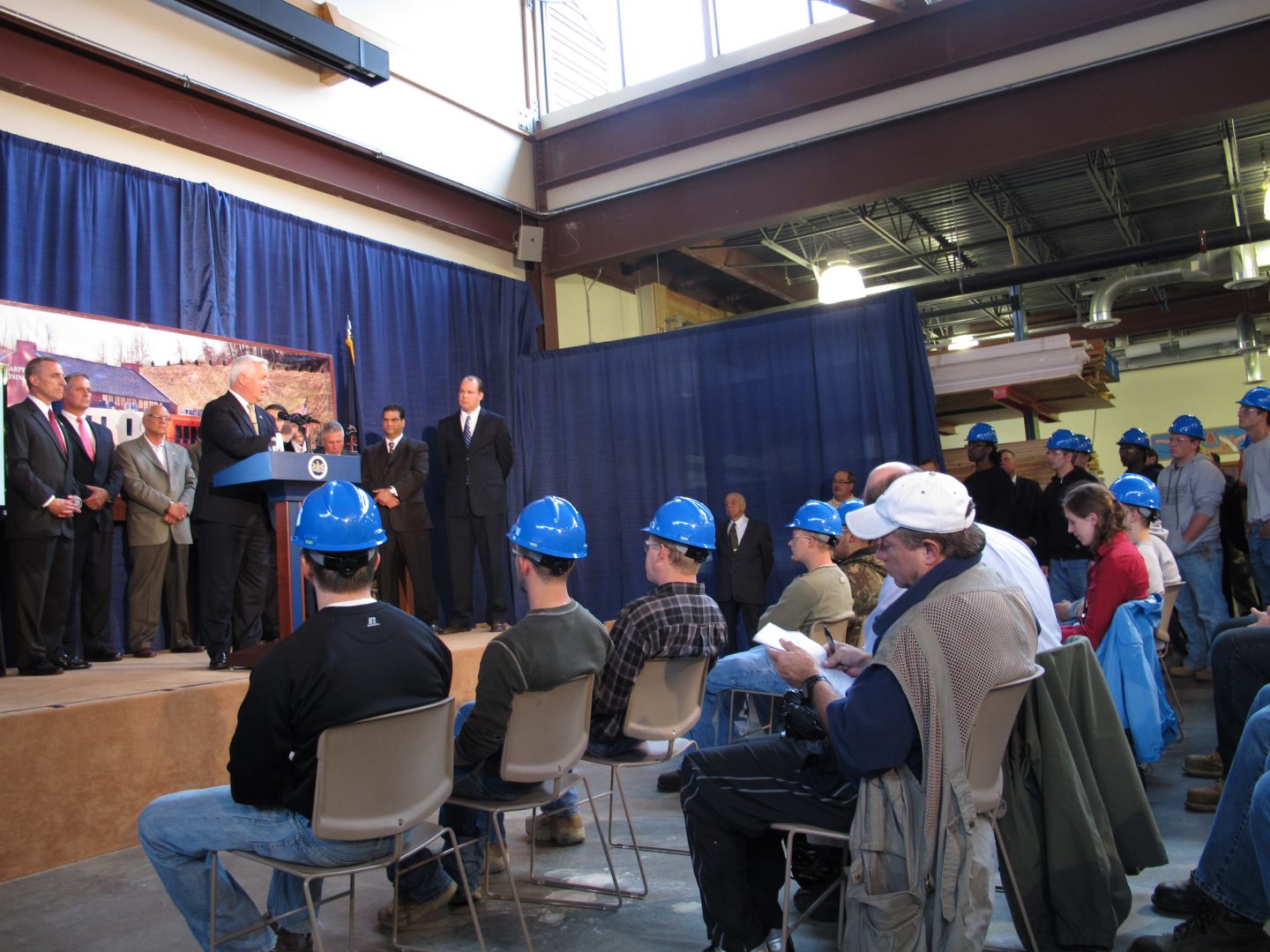 As Governor Corbett’s Marcellus Shale impact fee moves from proposal to bill, one factor may tie things up in the legislature: the Republican’s plan to let counties, not the state, assess and collect the levy.
Under Corbett’s proposal, each gas-producing county has the option to impose an impact fee, and can then set its own rate, up to $40,000. Lawmakers from both parties, as well as industry representatives and county officials, say that could lead to a confusing piecemeal framework, with different fee systems in every county and an uncertain level of revenue.
A “Border War”
Corbett’s county-level suggestion caught the County Commissioners Association of Pennsylvania by surprise, according to executive director Doug Hill. CCAP has pushed hard for an impact fee directing money to county and local government, and is generally happy with Corbett’s plan. But Hill said the group will need to hold a statewide conference call tomorrow, to figure out a stance on the local implementation and collection.

(Earlier this year, StateImpact took a look at the strain natural gas drilling is placing on counties’ emergency response units, and how an impact fee would help alleviate the problem.)
One concern, Hill said, was the possibility of an economic “border war.” “One county levies [a fee],” Hill explained, “and its neighbor doesn’t, [thinking], we’re going to be more competitive than you are.”
Indeed, counties would set their own rates under Corbett’s plan. The $40,000 first-year fee is a ceiling, not a standard. So Washington County could set a $30,000 fee, while neighboring Greene opts for a lower $5,000 rate.
Would the difference be enough to push the drilling industry out of one county, and into another? Marcellus Shale Coalition president Kathryn Klaber said it’s a possibility. “Any time you’re putting a higher fee or a different kind of administrative burden, all these things add up,” she said. “It’s clear the Coalition would be accepting of a modest, competitive fee, [but] as you start adding up, [a higher fee] can have a discouraging effect on capital investment. Because every single well is assessed for what kind of return it would deliver. There’s no doubt a fee or tax goes into that calculation.” What About Consistency?
Corbett’s proposal comes at a time when the drilling industry is pushing for more statewide standards on drilling regulations. Klaber and other energy industry representatives have long complained about the hodgepodge of local ordinances regulating drilling. During a May presentation to the Marcellus Shale Advisory Commission, she asked for more consistency. As I wrote at WITF’s State House Sound Bites, “She pointed out the gas deposit stretches through 37 Pennsylvania counties and 1,491 municipalities.  ‘If you were going to take a drive across Pennsylvania, and you needed to get a new license in each community you went through, that’s really the conditions in which the industry is operating,’ she said.”
Senate President Pro Tem Joe Scarnati’s impact fee would bar municipalities from receiving impact fee money, if they impose regulations tougher than a (yet-to-be-determined) model ordinance, drafted by the Public Utility Commission. Corbett’s plan doesn’t include a local zoning proposal, but yesterday, the governor didn’t rule out the idea. “The one thing we definitely need is a consistent, uniform application of rules across the state in this.”
Calling for consistency on the municipal level, while simultaneously allowing counties to set their own tax rates is “a huge contradiction,” Democratic Senator John Yudichak noted.  “The governor’s county-assessed fee approach will cre­ate a frag­mented patch work of ‘have and have-not’ com­mu­ni­ties across Penn­syl­va­nia,” he added.
Corbett’s office argued a county-by-county tax system is a different situation than differing municipal ordinances. “While we anticipate most, if not all, counties exercising their authority to adopt the maximum fee allowed, the potential of having different fees across counties is not a significant burden,” emailed Corbett spokesman Eric Shirk.  “This is a significantly different proposition than having potentially 2500 municipal zoning plans.”
The Marcellus Shale Coalition’s Klaber warned the situation becomes trickier, if each county imposes its own collection method. “As long as the program to administer looks the same, but for a rate, I think it could be workable,” she said. But differing collections systems, on top of varying municipal ordinances, “could have a dampening impact on the industry,” she said. “Especially when somewhere like Ohio…has a pretty straightforward local government structure.”
A state-level collection system would also make things more predictable for PennDOT, the Department of Environmental Protection, and other state-level agencies due to receive impact fee money. Corbett estimates his fee would bring in $120 million. But if not every county levies an assessment, and counties begin lowering their rates in order to appeal to drillers, the $120 million suddenly becomes much smaller.
The Road Ahead
The next step in the Corbett plan’s journey from proposal to law comes behind closed doors, when the administration begins meeting with legislative leaders. Based on their initial reactions, top lawmakers will likely try to ditch the county-level system.
Senate Majority Leader Dominic Pileggi said a county-level assessment is “technically possible,” but questioned its wisdom. “It would be easier to have a statewide tax imposed and collected. …You avoid the challenges of operations that overlap multiple county jurisdictions. And you have a predictable tax assessment system in place, so people doing business across the state have one office they need to communicate with.”
Corbett staffers will likely respond to that argument with the following thinking: if the point of an impact fee is to help out local governments, shouldn’t they be the ones in charge of determining how much to assess? “We want counties to have flexibility to see what their individual unmet needs are,” emailed Shirk, the Corbett spokesman, “and to consider their current level of support at the county level in determination of what the fee amount should be.”