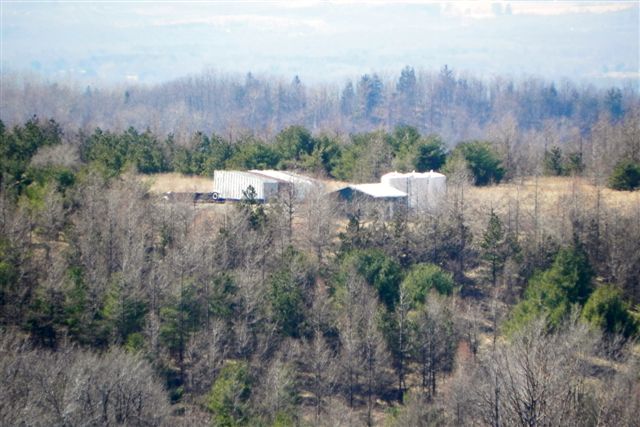 The Irvin injection well in Clearfield County is operated by Exco Resources.

This week, StateIm­pact is answer­ing reader-submitted burn­ing ques­tions about nat­ural gas drilling. On Mon­day, we tack­led water test­ing. Tuesday, we took a look at an issue that popped up after August’s Vir­ginia earth­quake: whether or not frack­ing can lead to earthquakes. On Wednesday, we looked at all things water.
Today’s question comes from Jenny Lisak. Lisak wants to know how many injection wells exist in Pennsylvania and where they’re located. The injection wells Lisak refers to are also called brine disposal wells, or class II underground injection wells. They can take any fluid related to oil and gas drilling.  In Pennsylvania the wells are regulated by the Environmental Protection Agency. The EPA took over the task of permits, inspections and enforcement from state regulators in 1985. Currently there are eight permitted injection wells in Pennsylvania. Two newly permitted wells in Warren County are under review and have not begun taking frack water yet. The EPA is also looking at a proposal in DuBois, Clearfield County.
[fusion_map] The oil and gas industry uses injection wells to dispose of waste water, which has a high salt content, as well as chemicals, heavy metals, and radioactive material. Much of the frack water produced in Pennsylvania gets trucked to Ohio, which has more disposal wells. Water can also be treated at private treatment facilities. The process cleans most of the water, but at least some smaller amount of fluid, or solid “cake,” still needs to be injected back into the ground. Prior to 1985, operators were allowed to dispose of brine in the state’s waterways.
No fracking is permitted with deep well injections. The wells are cased, and the waste water is sent thousands of feet below the surface, usually to a sandstone, or limestone formation.
Three of Pennsylvania’s deep injection wells are commercial, which means they can take water from any energy company. The others are permitted only to dispose of their own frack water. Range Resources used to operate an injection well in Erie County, which was permitted to take the most frack water in the state at 45,000 barrels per month. But that well has been recently plugged. Some take as low as 4200 barrels per month, but most of them can take about 30,000 barrels a month. EXCO Resources operates two in Clearfield County. One of those wells recently failed a mechanical integrity test, and a decision by the EPA on restarting the well is pending. EXCO failed to report leakage at that well for four months last year, and was fined by the EPA.
Other operators include Columbia Gas, Cottonwood and CNX Gas. Those wells are in Beaver, and Somerset counties. When it comes to pressure, the wells are permitted to take between 1300 to about 3200 pounds per square inch. The two newest permitted wells will be operated by Bear Lake Properties in Warren County. But local officials and residents have challenged those permits and they’re currently under review. All eight wells are in the western part of the state.
Lately, these types of deep injection wells have been linked to earthquakes in Arkansas and Ohio.