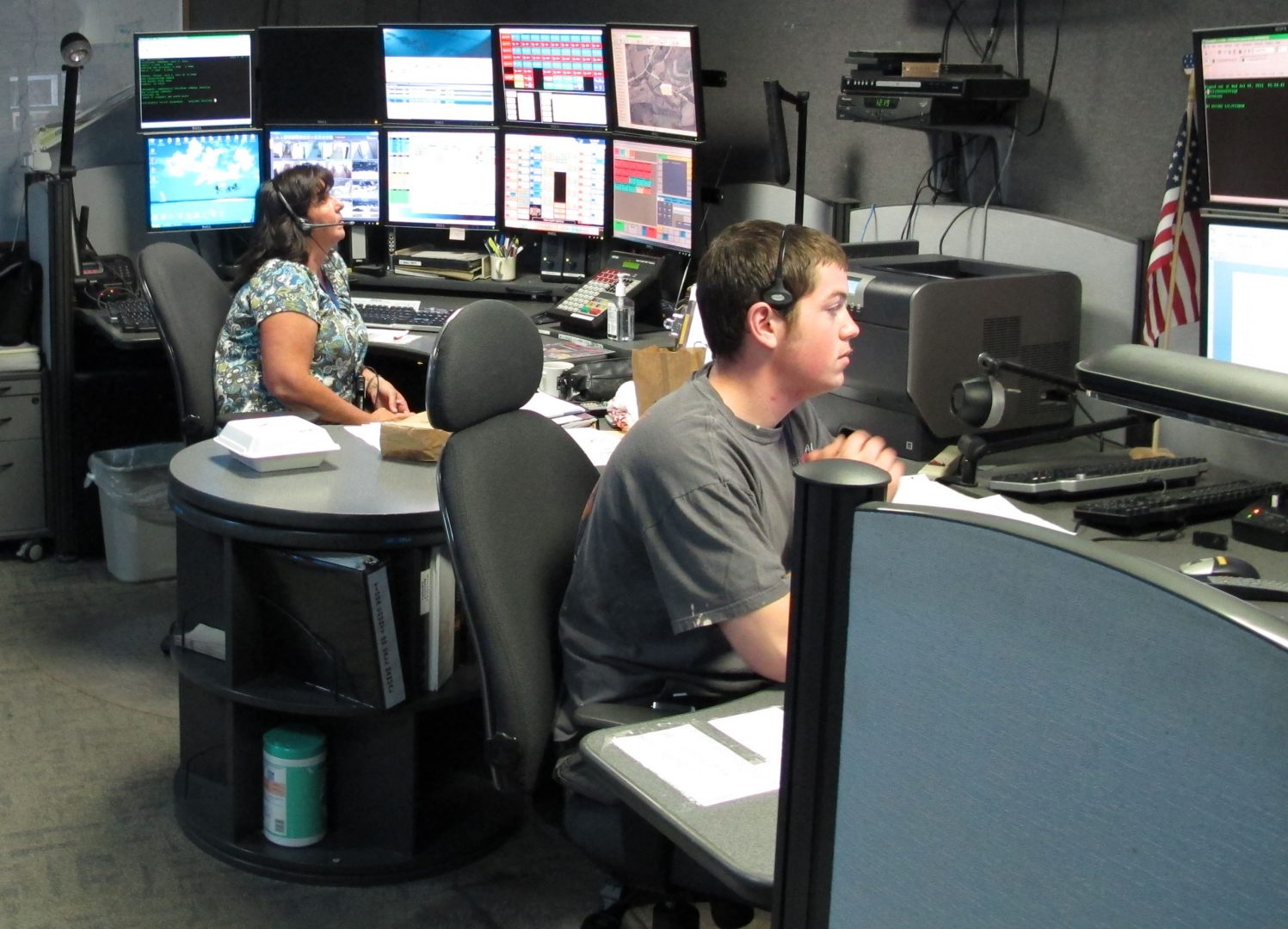 Part one of a two-part series. Read the second report here. Emergency services in drilling-heavy Pennsylvania counties face a troubling paradox: Even though their population has fallen in recent years, 911 call activity has spiked —  by as high as 46 percent, in one case.
StateImpact Pennsylvania sought 911 data from the 10 Pennsylvania counties with the most active wells last year. Seven of the eight drilling counties that responded saw 911 calls or incidents increase in 2010, just as census numbers showed a dip in the permanent populations of most those communities.
The rise in emergency calls is part of a long-term trend for Tioga County, where more than 130 drilling wells are active. Before drilling took off, the county’s 911 incidents had been steadily decreasing. Tioga handled 19,446 emergency incidents in 2007. That number jumped nearly 30 percent, to 25,155, by 2009. (There’s no 2008 data, due to a change in the county’s tracking software.) Lisa Rice, who runs Tioga County’s 911 center, said many of the calls stem from the heavy trucks clogging the county’s roads. “We’re seeing more accidents involving large rigs,” she said. “Tractor trailers, dump trucks. Vehicles – tractor trailers hauling hazardous materials. Those are things, two years ago, that we weren’t dealing with on a daily basis. It was more two-car accidents.”
Rice said before the heavy trucks came in, 20 traffic stops on a day shift was normal. Now, the county sees about 20 stops in a one-hour period. Dispatchers sitting in Tioga County’s 911 call center, located in the county courthouse’s basement, say they’re seeing similar spikes. A few years ago, they’d handle 15 to 20 calls during an eight-hour shift. Now, the total is more likely to surpass 70.
The increase is taxing Rice’s operators, especially since many of the calls are coming from — and caused by — transient drillers who aren’t from Pennsylvania and don’t know the area. Tioga’s call center is responsible for neighboring Potter County, so emergency services cover an area the size of Delaware. Callers aren’t sure what road they’re on, or what township they’re in. “So that takes up a lot of time,” said Rice. “A call from a resident – a permanent resident – who can tell me in 30 seconds where he’s at becomes a 3 or 4 minute interview, trying to figure out where that caller is at.”
Tioga’s next-door neighbor, Bradford County, has seen a spike in calls, too. The county, which has about 170 wells, handled 16,140 calls in 2008, 18,116 in 2009, and 19,989 in 2010 – a 10 percent increase in the past year.
The most dramatic increase is McKean County, where incidents jumped 46 percent from 2009 to 2010, from 17,002 to 24,983.
Up and Down More calls, more traffic. Yet the latest census totals show population decreases in six of the eight counties over the past decade. At a time when thousands of transient drillers have swarmed Tioga County, for example, its population grew less than 2 percent. “In reality, that is just not true,” said Republican Commissioner Mark Hamilton. “Numerous campgrounds have sprung up. We have a ton of people who are living on well sites. We have man camps that have sprung up. And I don’t think any of those have permanent addresses,” he said.
Those “campers” aren’t counted in census totals. Hamilton said Tioga County is considering requesting a census recount, but is leaning against the action, since the county would need to foot the six-figure bill, and likely wouldn’t see much of a difference in its final totals because of the way figures are counted.
Some Exceptions
It’s not an across-the-board rise in drilling communities. Greene County, which hosts more than 200 wells, held relatively steady over the past three years: 48,822 calls in 2008, 51,287 in 2009, and 49,940 last year. And while Lycoming’s calls increased 5 percent from 2009 to 2010, they were higher in 2008.
And not every emergency official is as concerned as Tioga’s Rice. Bradford County’s director of public safety, Robert Barnes, said his 911 operators are handling the increase just fine. “We’re challenged by the impact of the gas industry, but we’re certainly not overwhelmed,” he said.
Barnes is concerned that traffic jams caused by drilling trucks are slowing down emergency response times. “We’re impacting the ability of the volunteer emergency responders to get to the firehouse to get their equipment to go to emergency calls,” he said. “I can’t tell you exactly how much time we’re adding to a call, but probably a minute or two, perhaps. Which can be a lot.”
Doing More With Less
To make matters worse, the county has lost 911 operators over the past few years, going from 20 to 15 staffers. Rice is confident the decrease is an indirect consequence of drilling, which is flooding the community with high-paying jobs.  People are leaving their county positions for the bigger paychecks.
Tioga County’s Lisa Rice stood in the middle of the dimly lit call center and pointed to Sheila Delosa, one of the county’s most senior dispatchers. “Our ability to keep people like Sheila is going down, as the industry is coming in and taking people that would stage for the wage we’re able to pay. Young folks like our trainees can probably go somewhere else and make more money.”
Click here to read about how Tioga County officials are worried they’ll need to hike property taxes to bolster their stretched resources, and whether an impact fee on natural gas drillers would solve the county’s problem.