Demonstrators hold protest signs against the ACCESS Oklahoma turnpike project at the Jan. 3, 2023 OTA board meeting.

In December, the Cleveland County District Court found the OTA had violated the state’s Open Meeting Act by using vague wording in agendas for two key meetings that authorized ACCESS projects. Because that ruling invalidated the board’s votes for construction contracts and put the ACCESS program on pause, the agency re-voted on the contracts — approving all of them unanimously.

The 15-year ACCESS Oklahoma project was announced following the Feb. 22 OTA Board meeting. It would construct new turnpike extensions in Oklahoma and Cleveland Counties, among others, some of which are estimated to force over 600 homeowners out of their properties — though the OTA said the number is closer to 200.

But although the re-vote corrected violations from previous meetings, Oklahoma Transportation Sec. Tim Gatz told media after the meeting ACCESS engineers aren’t yet being given the green light to resume work.

“That’s going to take us a little bit of time to ramp back up,” Gatz said. “We’ve got some work to do.” 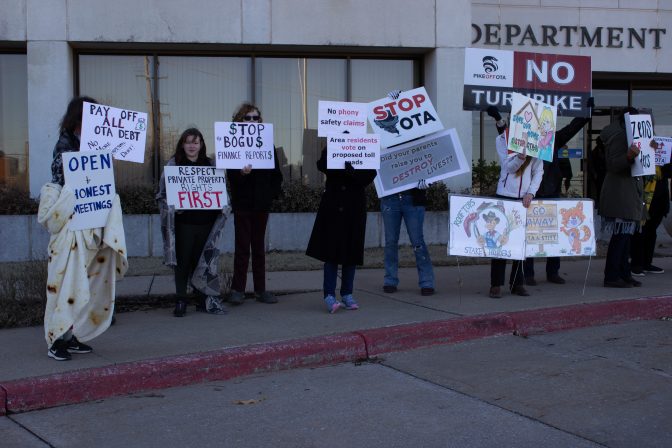 Residents gather outside of the OTA January Board Meeting to protest the $5 billion ACCESS Oklahoma turnpike project on Jan. 3, 2023.

Gatz referenced the other lawsuit holding the ACCESS project in the balance — the case as to whether the agency has the legislative authorization to build several routes. That case was referred to the state Supreme Court in December.

Amy Cerato, a civil engineer and turnpike opponent, alleged the authority’s traffic projections — which are used in part to justify new projects — were grossly inflated.

Sec. Gatz later disputed this, saying the numbers brought forward in the meeting “don’t align with the numbers that we have in our documentation and our facts.”

Gatz was later asked if the OTA intended to make good on its offer from a previous meeting to meet with Cerato.

Cerato delivered a presentation in March alleging major engineering and administrative missteps in the project, after which Sec. Gatz announced he “hoped OTA’s engineering team would use her as a resource and continue to have an open line of communication with her.” He confirmed the OTA has not yet met with Cerato.

“We’ve met before,” Cerato told OTA Board members during the meeting’s public comment section. “And when I spoke to you about why the proposed toll road routes in Cleveland County made no sense, I thought my engineering and environmental arguments might be persuasive because in my life, facts matter. But now I know better.”

The OTA’s next board meeting is scheduled for Feb. 1.