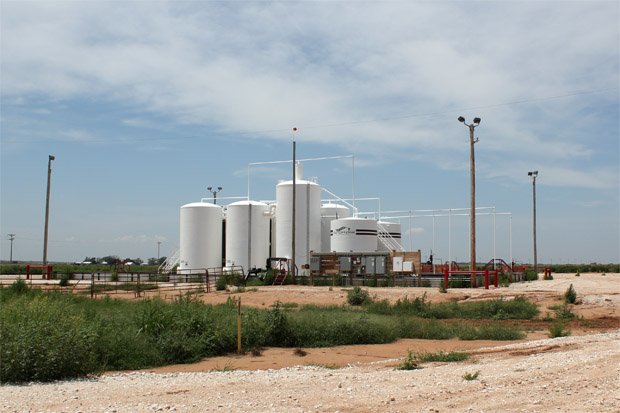 The first lawsuit filed against Oklahoma oil companies over earthquakes is now settled.

Sandra Ladra was injured by rocks that shook loose from her fireplace during the 5.7-magnitude temblor that struck near the city of Prague in 2011. The quake is one of the strongest ever recorded in Oklahoma and was the first one scientists linked to wastewater disposal wells used by the oil and gas industry.

In 2014, Ladra sued New Dominion, Spess Oil and 25 other unnamed companies, accusing them of operating disposal wells that triggered the quake. A district judge initially dismissed the lawsuit, citing the Oklahoma Corporation Commission as having jurisdiction over the case. The Oklahoma Supreme Court later reversed that decision and sent the lawsuit back to district court.

Spess Oil and New Dominion reached an undisclosed settlement with Ladra, and the case was dismissed on Oct. 8, court records show.

In a separate case brought by Ladra’s legal team,  former state seismologist Austin Holland recently testified that he left his job at the Oklahoma Geological Survey after a supervisor reprimanded him for co-authoring a 2015 scientific paper that linked earthquakes to disposal wells.

StateImpact has requested but not yet reviewed a full copy of the deposition, but attorney Scott Poynter has described portions of the testimony on the law firm’s blog:

Holland’s testimony was that he was called into his boss’s office and “reprimanded” for his work, which University of Oklahoma Dean Larry Griollot termed as “unacceptable.” In all, Dr. Holland said it was one of those conversations you don’t think you will ever have with a supervisor, and further, one you wish you had a recorder with you to tape the statements being made.

Further, Dr. Holland testified that his OGS colleague Amberlee Darold was also reprimanded for public statements she made to media that linked Oklahoma’s earthquakes to wastewater disposal. According to Holland, Darold’s bosses at OGS ordered her to never speak to the press again.

In the deposition, Holland also describes a meeting between Oklahoma Geological Survey staff and New Dominion. At the meeting, Holland says, OGS and the oil company collaborated on a plan to respond to a scientific paper written by a different OU scientist that linked the Prague quake to wastewater disposal wells.

In about March 2013, then OU scientist Katie Keranen published a study linking the Prague quakes to wastewater disposal wells operated nearby by both New Dominion and Spess Oil.

Under oath, Dr. Holland said he participated in a meeting with his Director at OGS, which also included as a participant New Dominion’s VP of Exploration, Jean Antonides.  The meeting occurred just after the Keranen study was out, and Holland testified that the purpose of the meeting was to develop a plan to respond to the Keranen scientific paper.

Holland, in sworn testimony, said New Dominion (which the Keranen study tagged as one of the culprits of the Prague quakes of November 2011) said it had a plan in place to sue Keranen and had drafted a complaint, and further, wanted to make her life “uncomfortable.”

Holland declined StateImpact’s request for comment; Darold did not respond. New Dominion and Spess Oil did not immediately respond to interview requests.