Shaken residents lined up inside Edmond's Waterloo Baptist Church in June 2014 to voice concerns and ask officials questions about Oklahoma's spike in earthquakes." 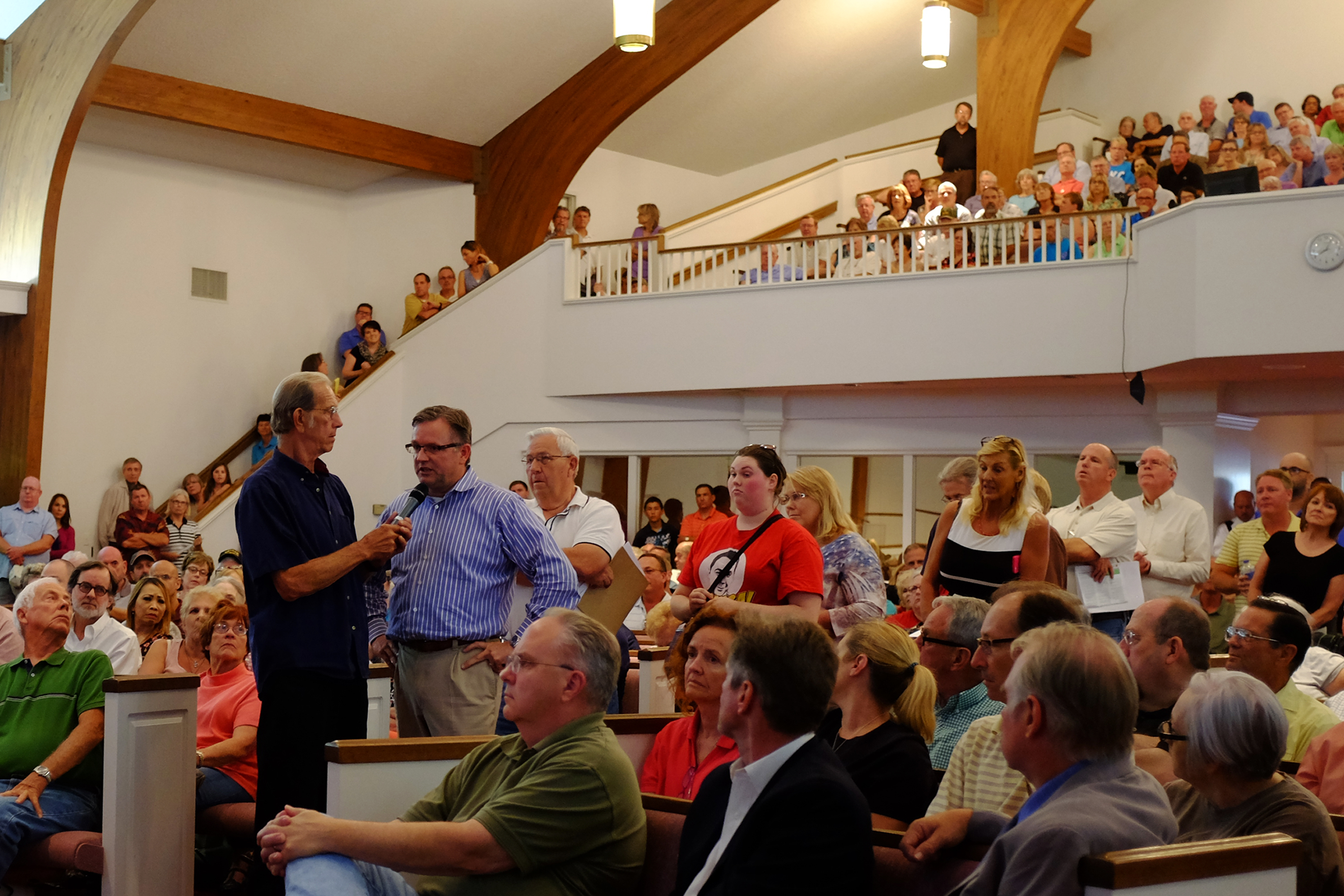 Shaken residents lined up inside Edmond’s Waterloo Baptist Church in June 2014 to voice concerns and ask officials questions about Oklahoma’s spike in earthquakes.”

Federal researchers feared Oklahomans were getting inaccurate information and inadequate warnings from state government scientists and officials tasked with studying and responding to a surge of earthquakes linked to oil and gas activity, a StateImpact investigation has found.

The earthquake on Dec. 7, 2013, happened on a Saturday, shortly after noon, during one of the biggest Oklahoma sports events of the year: The University of Oklahoma vs. Oklahoma State University “Bedlam” college football game, hosted that year at Boone Pickens Stadium in Stillwater.

The 4.5-magnitude earthquake, which rumbled at the very moment a Cowboys kicker scored a 41-yard field goal, caused very little damage, but it rattled a lot of nerves. More than 2,800 earthquakes were recorded that year — an all-time high. The state set new records in 2014 and again in 2015.

Oklahoma Geological Survey responded by issuing a statement that pointed to natural causes, minimized the severity of the seismic surge and downplayed what a growing number of scientists had been saying for months: Wastewater disposal wells operated by the oil industry were probably causing many of the earthquakes.

When geophysicist Robert Williams saw that statement, he typed a worried email to his colleagues at the U.S. Geological Survey. “Alarm bells are ringing,” Williams wrote. The statement from the state seismological agency reminded him of the 2009 earthquake that killed more than 300 people in L’Aquila, Italy.

“The citizens felt surprised,” Williams said in an interview with StateImpact. “They blamed the scientists.”

Six Italian earthquake experts were convicted of manslaughter for failing to warn residents. Their convictions later were overturned, but the trial still lingers with earthquake scientists everywhere.

“That was in our minds a bit,” Williams said. “We want people to be aware so they can take actions to protect themselves and mitigate damage. It’s fundamental to what our role is.”

USGS researchers condemned the conclusions proffered by Oklahoma’s official source for earthquake facts, emails show. The OGS statement, Williams wrote, was “irresponsible” because it didn’t warn everyday Oklahomans that the risk of shaking was higher than it had ever been.

“When a concentrated sequence gets going like it did in Oklahoma, we were very concerned,” Williams said.

The tension between federal and state researchers was not isolated.

As earthquake activity spiked, U.S. Geological Survey scientists feared Oklahomans were getting inaccurate information from state officials and the oil and gas industry, according to internal USGS emails obtained through the Freedom of Information Act.

A chorus of USGS researchers found statements issued by the Oklahoma Geological Survey from 2012 to 2015 to contain incorrect and misleading information and guidance. For years, the Oklahoma agency emphasized the possibility that natural forces were responsible for the earthquake uptick.

“They just had a different perspective,” Williams said about OGS leadership at the time. “They were more likely to think the earthquakes were not caused by disposal of fluids in wells.”

Federal scientists thought this was misguided. They wanted the state to issue more serious warnings about the possibility for more severe shaking, a point of contention as the two agencies drafted a joint statement released in May 2014.

Taking into account the 5.7-magnitude earthquake that injured two people and damaged scores of homes near the town of Prague in 2011 — which research suggests was triggered by wastewater disposal wells — Williams and other USGS researchers wanted to warn the public about the potential for an even larger temblor.

The OGS resisted, the emails show. The state agency suggested language reminding the public that tornadoes were a bigger hazard than earthquakes. Both were left out of the final statement.

“The bottom line goal was to get the message from OGS and USGS to the people of Oklahoma that there is a much higher chance of a larger damaging earthquake,” Williams says. “It takes a lot of editing among colleagues to get the wording right and to get agreement among the scientists.”

Senior Science Advisor Bill Leith and others at the USGS also criticized the state agency for embracing fringe theories, like suggesting one flurry of quakes was caused by rainwater filling Lake Arcadia, a small lake near the city of Edmond.

“I felt immediately that that was very unlikely,” Leith said in an interview. “We weren’t on the same page about some of these potential alternative explanations, or that these were natural earthquakes, early on.”

Federal researchers also admonished state officials for exaggerating an apparent earthquake slowdown in January 2015. In emails to colleagues, Williams of the USGS questioned whether “Oklahomans are getting the correct story” from Secretary of Energy and Environment Michael Teague, whom Gov. Mary Fallin picked to lead a state council charged with coordinating the state’s earthquake response.

In an interview, Teague said his comments were based on information relayed by the OGS. The head of the state agency during the height of the earthquake boom, Randy Keller, did not respond to an interview request. He retired from the agency in 2014.

The state seismologist at the time, Austin Holland, didn’t grant an interview either. He left the agency last year for a USGS post in Albuquerque. In other interviews, Holland acknowledged feeling pressure and intimidation from Oklahoma’s economically vital oil industry and influential energy executives with close financial and personal ties to the University of Oklahoma, where the state agency is headquartered.

USGS and university scientists also were critical of the oil industry’s efforts to deflect or diminish its role in the shaking, the emails show. In one case, researchers excoriated statements made by Glen Brown, senior vice president for exploration at Continental Resources, who pinned the shaking on a global earthquake pattern.

“I’m not sure if I’ll even engage Glen Brown,” USGS geophysicist Justin Rubinstein wrote in February 2015 in anticipation of a meeting the oil executive was expected to attend. “Given that he’s a zealot, I don’t know if it’s really worth it to get in an argument.”

Brown and Continental declined an interview and a request for comment.

The emails also confirm that federal researchers and independent university scientists struggled for years to get accurate, up-to-date disposal well data from the Oklahoma Corporation Commission, the state’s oil and gas regulator.

The bulk of the data problems have been resolved, according to state, federal and university earthquake scientists who spoke to StateImpact, but they all agree that the research on oil industry-linked earthquakes would be improved if regulators required injection well operators to record more information, more frequently.

The scientific community also faced challenges getting oil and gas companies to share operational data and proprietary geological information, which is prized in the industry as a competitive roadmap to petroleum fortunes, the emails show.

That process has improved, too, scientists say. Today, earthquake researchers are more easily tapping into dense, high-resolution datasets provided by the industry. Jeremy Boak, the current director of the OGS, says the more collaborative relationship is paying deep dividends, most recently in helping understand a burst of strong earthquakes in northwestern Oklahoma.

“When you look at the fault data from where we are and where we were — it’s just night and day,” says Teague, the energy and environment secretary.

Boak, who took over the agency in July 2015, says a difference in mission explains why some issues have divided state and federal scientific agencies in the past.

“As a state researcher, you face the possibility that you might find yourself in an administrative law proceeding,” Boak says, noting that OGS earthquake analyses are used by state oil and gas regulators when they issue, deny or alter well permits — and by the industry when they apply or challenge such actions.

“To try and make important regulatory decisions that might have monetary implications, you had to sort of have your ducks in a row a lot earlier and you had to lay out much more rigorous and strict procedures for what you were doing,” he says.

It’s been one year since the state formally acknowledged the oil industry’s role in Oklahoma’s earthquakes. Federal and state officials still disagree on some of the details, but both agencies say they’re on the same page, scientifically.

“We’re in a different place now, for sure,” Williams says.

Leith, his USGS colleague, agrees. “In terms of community awareness, people are starting to take some actions, so that’s good,” he says.

The two agencies are also in much closer agreement on how to communicate to the public that Oklahoma is now one of the most earthquake-prone places in the nation.