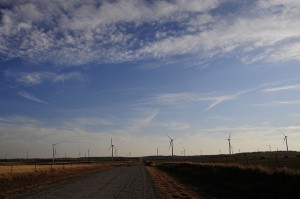 The new wind production tax is part of Fallin’s 2018 executive budget, a document written to guide the Legislature as it struggles to fill an $870 million revenue shortfall and write bills appropriating money to hundreds of state agencies. In her budget, Fallin also suggests an early end to tax incentives for the wind industry. Combined, the two efforts are expected to generate $36.6 million in revenue.

If lawmakers adopt Fallin’s proposal, Oklahoma would be the second state to impose a tax on wind power, “and its tax would be the nation’s highest,” The Oklahoman’s Paul Monies reports:

The idea of taxing wind production has been floated before at the Capitol, including last year when some oil and gas executives also said state wind incentives were too generous. The Legislature did not take any action to curtail the wind incentives or enact a new tax last year.

Fallin’s budget book said the growth of the wind industry in Oklahoma means it no longer needs tax breaks. The state ranks fourth in the nation for wind capacity, and Oklahoma got about 20 percent of its electricity from wind in 2016.

Since Fallin’s proposed wind production tax is new, it faces significant procedural and political hurdles: It would need to win three-fourths approval in the Oklahoma House and Senate.