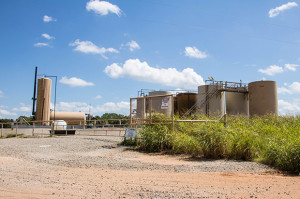 Officials with the U.S. Environmental Protection Agency say Oklahoma oil and gas regulators should “consider a moratorium” of waste-fluid disposal in its most seismically active areas.

The suggestion was made in the federal agency’s annual review of the Oklahoma Corporation Commission’s oversight of disposal wells, which Energy Wire’s Mike Soraghan obtained through a Freedom of Information Act request:

State officials from Republican Gov. Mary Fallin on down previously have rejected activists’ calls for a moratorium, saying they lack the authority. Stopping disposal operations in an area could severely restrict oil production there. The most heavily shaken areas sit atop the Mississippi Lime formation in north-central and northwest Oklahoma.

OCC officials noted that they’ve shut down wells, cut injection volumes by 800,000 barrels a day in earthquake-prone areas and introduced a comprehensive response to the shaking. But the agency didn’t respond directly to the suggestion of a moratorium.

The proposed moratorium is likely to get a “hostile” reaction from the energy industry and Oklahoma officials, Energy Wire reports.

“I find it surprising they came out with this, given the dramatic reduction in seismicity we’ve had,” Hatfield said.

“EPA’s involvement in Arbuckle is unnecessary,” Inhofe said. “The state has been very responsive to seismic issues and their possible links to some of these wastewater disposals.”

In the annual review, EPA officials praised the “day-to-day” efforts of Corporation Commission staff in dealing with the earthquakes and related actions, and noted the agency’s struggles with reduced funding from state and federal sources, Energy Wire reports, but the federal agency criticized the state for not penalizing violators and permitting new wells in regions with concentrated earthquake activity:

And the review noted that despite the actions taken by the state, the quakes have continued. Hundreds of wells are still injecting wastewater in what the state calls its “area of interest” covering north-central and northwest Oklahoma. EPA said it believes wastewater being injected in those areas might be continuing to cause earthquakes.

EPA said that is why it recommended the idea of a moratorium. When offered the chance, OCC officials did not object or even respond, according to a letter accompanying the review.

EPA can’t force Oklahoma regulators to order a moratorium, Energy Wire reports, but the federal agency could revoke the state’s authority and take over regulation of disposal wells.