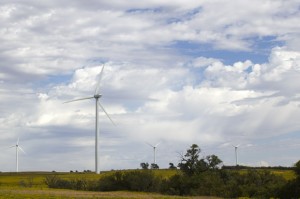 WindWaste, a group founded by Claremore businessman Frank Robson, said its latest estimates of future wind farm developments in Oklahoma show the state’s annual outlay of rebates from the incentive could balloon to more than $500 million annually as early as 2019.

The WindWaste estimates assume all wind projects that showed an interest in connecting to the regional grid will get built. It also assumes a larger-than-expected build out of wind farms for the Plains and Eastern Clean Line, a high-voltage, direct-current transmission line that will ship renewable power from the Oklahoma Panhandle to Tennessee.

Mosier conceded his analysis is at the top end of estimates. But he said looking at data from the Southwest Power Pool on future generation connections to the grid is a good start. The pool showed 11,800 megawatts of wind capacity planned for Oklahoma in the queue at the end of August.

They said the Southwest Power Pool interconnect queue has had a historical build-out rate for generation of almost 15 percent.

For example, the Southwest Power Pool had more than 100,000 megawatts of wind generation in its queue in the past decade, but only 13,000 megawatts got built and connected to the grid. Another 2,000 megawatts are under construction in the region.

Clark said the zero-emissions tax credit will sunset at the end of 2020. The industry also worked with the Oklahoma Legislature to end a five-year property tax exemption for wind projects. Groups like WindWaste focus only on the costs of incentives, he said.

State lawmakers have scrutinized incentives and credits for the wind industry in recent years, and the debate is likely to deepen during the 2017 legislative session, which starts in February.