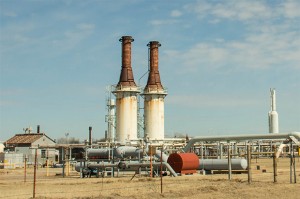 But the plant is being constructed in the middle of the City of Tuttle, and due to Oklahoma’s 2015 anti-frack ban law that limits local governments’ ability to regulate oil and gas activity, there is very little officials like City Manager Tim Young can do about it, The Journal Record‘s Sarah Terry-Cobo reports:

Young has fielded residents’ concerns about noise from operations and about heavy truck traffic.

“I tell residents the city of Tuttle cannot tell an oil and gas company where to drill, so it’s best to work with the company and work within the existing statutes,” he said. “That leaves us with little ability to regulate the industry.”

The company has been responsive to the city and its residents’ noise and traffic concerns, Young said. If he had an option, he said the city would have rejected the planned site for the gas processing plant, in the city’s geographic center. Though the area is still relatively undeveloped, the plant is across the street from a new park and near homes valued around $250,000.

Young says Linn Energy “has been an excellent corporate citizen,” agreeing to plant trees and build a berm around the plant and install mufflers on compressor engines. Local businesses are happy with extra sales to about 120 construction workers, and the city should see some increased sales taxes, but the increased oil and gas activity has strained the community, Terry-Cobo reports:

Oil and gas drilling increased truck traffic and created more wear and tear on local roads and bridges. Young estimated about $700,000 worth of damage has been done to Tuttle’s roads since drilling began last July. It costs about $350,000 to repair 1 mile and there hasn’t yet been enough sales taxes to offset those costs, he said.