Oklahoma On Track to Top California in Wind Power Capacity 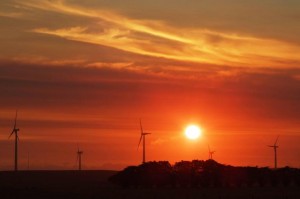 Oklahoma remained No. 4 in the U.S. in installed wind power capacity during the second quarter of 2016, but a national industry group expects the state to move up the ranks by the end of the year.

No new wind farms have been completed in recent months, according to a report from the American Wind Energy Association, but more than 1,100 megawatts are currently under construction, The Oklahoman’s Paul Monies reports:

Oklahoma has 5,453 megawatts of wind capacity installed, after adding 270 megawatts in the first quarter. The state continued to rank fourth in the nation for installed wind capacity, following Texas, Iowa and California. Nationally, more than 49,000 turbines are installed, representing 74,821 megawatts of capacity.

The wind association said 12,462 megawatts of wind capacity are under construction across the country, with Texas (5,253 megawatts), Kansas (1,259 megawatts) and Oklahoma (1,130 megawatts) leading the way.

Oklahoma is expected to pull ahead of California for total wind capacity by the end of the year. California, an early leader in wind development, has 5,662 megawatts of installed capacity but just 131 megawatts under construction. Kansas is currently No. 6 in the state rankings, just behind Illinois.

Six different projects are underway across the state, Monies reports (bullets mine):

The growth of Oklahoma’s wind industry comes amid political debates over state incentives for wind projects. A push to cut incentives and create a new excise tax on wind production stalled during the 2016 legislative session, but will likely be revived in 2017, Monies reports:

A wind excise tax was among the recommendations by the Windfall Coalition, a group formed earlier this year by Continental Resources Inc. founder and CEO Harold Hamm to call attention to the growth of wind incentives amid the state’s revenue shortfall.