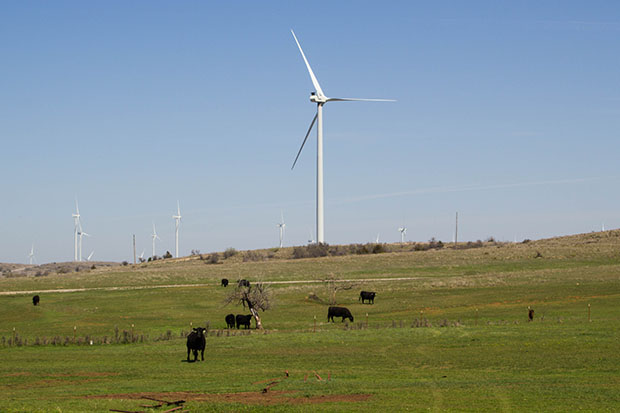 Southwestern Oklahoma is in the middle of an airport boom, but the new airstrips weren’t planned to attract travel — they’re designed to repel wind farms.

The rush to register airstrips is part of the fallout from a state law passed last year that put in siting regulations on wind turbines. Senate Bill 808 said the turbines had to be at least 1.5 nautical miles — 9,100 feet — from a school, hospital or airport. The law went into effect in November.

More than two dozen airstrips have been registered this year, 15 of which are near Marlow in Stephens County, Monies reports, nothing that just a few of the 30 airstrip applicants appear to have pilot licenses. The wind industry representatives call the airstrips “shamports”:

NextEra Energy Resources plans a 120-turbine project in Stephens and Grady counties. The Rush Springs project is expected to be complete by the end of the year. Further north, NextEra is building an expansion to the Minco wind farm in Canadian and Caddo counties. The company declined repeated requests for comment.

Lynn Logue, a Marlow resident who registered Logues International Airport in February, said he understands both sides of the wind development issue. But he wanted to protect his property value. Logue, who isn’t a pilot, said he has several neighbors who feel the same way.

“I still think Oklahoma is a beautiful spot,” Logue said. “I just don’t particularly care to be looking at that kind of thing. Unfortunately, its really put neighbor against neighbor. I hate to see that kind of deal go that way. If I had some land that I didn’t live on and I wanted them, I’d feel it’s my right to put it on there. I see both sides.”