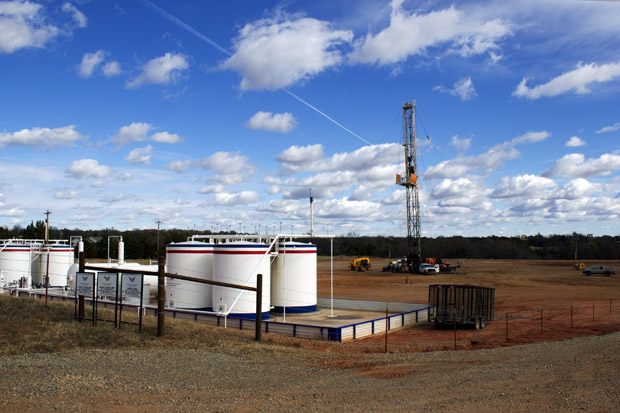 The oil boom minted millionaire executives and transformed Oklahoma City into a corporate energy hub, but industry tax breaks and funding cuts kept much of the prosperity from reaching public services, a new Reuters investigation shows.

Shale regions are hurting across the country. Since 2014, the U.S. energy industry has shed more than 100,000 jobs. But during the drilling spree of 2008 to 2014, oil-rich states like North Dakota and Texas saw a sharp rise in oil-and-gas tax revenue and salted away a chunk of it for education. Over the same period, Oklahoma’s oil and gas production tax revenue slid 32 percent, in spite of soaring oil prices and a doubling of oil output.

At least 100 school districts are now considering shorter weeks or school years and 1,000 school jobs are at risk, Reuters reports:

Among the hardship measures being implemented, according to recent school surveys: bigger class sizes, teacher pay cuts and hiring freezes, cutbacks in arts, athletics and foreign language instruction, fewer offerings for special needs and gifted students, and a moratorium on field trips.

The oil and gas industry, for its part, touts the role it plays in funding education, Reuters reports:

In March, a poster in the lobby of driller Continental Resources’ headquarters featured a smiling boy and read, “Oklahoma oil & gas produces my education.”

Kristin Thomas, a spokeswoman for Continental, said the industry and its employees are the state’s largest bloc of taxpayers, while drillers pay billions more in royalties to landowners. She said tax breaks for other industries, such as wind energy, have hurt education funding.

“We don’t have a revenue problem in Oklahoma,” Thomas said. “We have a spending problem.”

But the Reuters analysis shows tax credits and exemptions for the wind industry totaled $306 million from 2004 to 2015, compared to $1 billion from 2012 to 2015 for horizontal drilling tax breaks alone.

After intense industry lobbying, private meetings at the governor’s mansion and pre-vote lawmaker events hosted at energy company offices, legislators passed and Gov. Mary Fallin signed a measure — which some in the industry said was unnecessary — extending and modifying a tax break that was set to expire in 2015, Reuters reports:

… a 2-to-1 majority of Oklahoma lawmakers voted to tax all horizontal and vertical wells at 2 percent for the first three years of production. That’s when horizontal wells yield the most oil – and the most potential tax. After three years, output from a typical horizontal oil well in the state has declined by 86 to 89 percent from peak levels, according to industry consultant Drillinginfo.

Drillers cheered the outcome, which was similar to their own proposal. For the first time, the vote would make the tax breaks permanent. Though it lifted the tax burden from 1 percent to 2 percent during a well’s early years, oil companies were now guaranteed some of the most driller-friendly rates in the country.

The cumulative result of the tax breaks and exemptions, Reuters reports, is that energy tax revenues fell as oil and gas production boomed:

That’s partly because over time, more and more of Oklahoma’s production came from horizontal wells, taxed at the far lower rate.

To be sure, lower natural gas prices also explain part of Oklahoma’s revenue crunch. Between 2008 and 2014, gas prices fell by around 50 percent, even as oil prices frequently topped the $100 a barrel mark.