A flowchart from ODOT's new manual on inspecting bridges after earthquakes.

The Transportation Department’s New Plan for Inspecting Bridges After Earthquakes 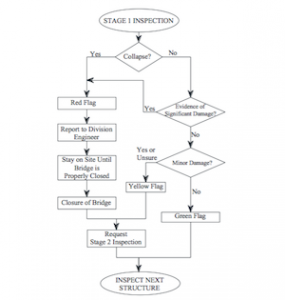 A flowchart from ODOT's new manual on inspecting bridges after earthquakes.

The Oklahoma Department of Transportation has changed its post-earthquake bridge-inspection plan after a year-long study showed no structural damage from seismic activity.

Under the new plan, which went into effect April 1, ODOT will only inspect bridges after magnitude 4.7 or greater quakes. Regions where bridge inspections are required will expand as earthquake intensity increases:

The $575,000 study conducted by engineering consultants and researchers at the University of Oklahoma showed no earthquake-related structural damage to bridges since inspections started in 2013. This is the fourth time ODOT has changed its post-earthquake bridge-inspection protocol since Oklahoma boom in oil industry-linked earthquakes started, it said in a statement:

ODOT previously checked bridges after almost every earthquake, then adjusting later to inspect after every 3.0-magnitude event. After consulting national experts, including the California Department of Transportation, the U.S. Geological Survey and Oklahoma Geological Survey, that protocol changed in mid-2014 to inspections after every 4.0-magnitude event within a 5-mile radius of the epicenter.

“We were conservative in our approach to bridge inspections, but now we have the science to know with more certainty that 4.0- to 4.6-magnitude earthquakes present no danger to transportation infrastructure in the state,” said Casey Shell, ODOT chief engineer. “This change in protocol allows the department to better focus its resources.”

The agency hopes to save money by not conducting unnecessary inspections. Under the previous plan, ODOT would have ordered examinations of bridges at least 29 times in 2015, data from the Oklahoma Geological Survey suggest. Under the newly released protocol, inspectors would have been dispatched just twice, data show.

Research from the study was also used to create a manual for inspecting bridges after earthquakes that is to be “used by all ODOT bridge inspectors statewide, and will be shared with other state agencies and government entities such as the Oklahoma National Guard and with counties and municipalities.”