Panhandle residents pouring over maps showing possible routes for the Plains and Eastern Clean Line Project, which, if approved, would funnel wind power from Oklahoma to the southeastern U.S. power grid. 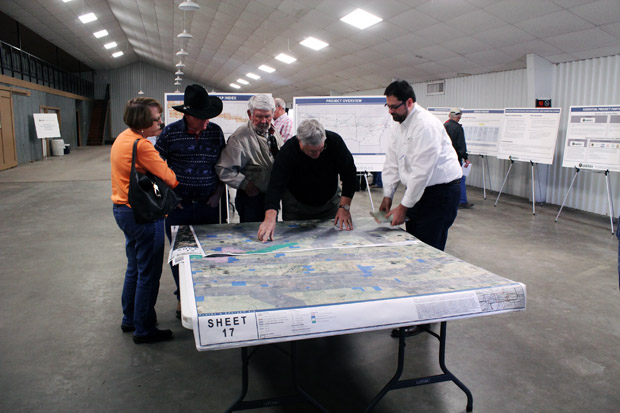 The U.S. Department of Energy on March 28 cleared the way for construction of a 700-mile transmission line project designed to carry Oklahoma wind power to the southeastern U.S. electricity grid.

The $2.5 billion Plains and Eastern Clean Line is different than the typical AC power lines that crisscross the U.S. It’s a high-voltage direct-current line, which is more expensive to build but loses less electricity over long distances.

Construction is likely to begin some time in 2017 and is projected to be completed in 2020. The transmission line will carry up to 4,000 megawatts of wind energy generated in Oklahoma’s Panhandle through Arkansas to a hub near Memphis.

On a conference call with reporters, Clean Line President Michael Skelly said the line will carry enough electricity to power more than a million homes.

“This project will deliver about five times the renewable energy currently delivered to the southeast,” he said. “The grid we have in place simply isn’t up to the task.”

The company sought federal participation in the project after running into opposition in some states, including the Cherokee Nation. Opposition has been particularly fierce in Arkansas, which denied Clean Line utility status.  That state’s Republican Congressional delegation denounced the federal approval as federal overreach.

This is the first time the Department of Energy has used authority delegated to it by Congress through Energy Policy Act of 2005 to promote transmission projects that modernize the U.S. electricity grid, federal officials said.