Jack Romine stands near a makeshift chimney state inspectors installed over an abandoned, leaky well that was discovered near his home in Bartlesville, Okla. 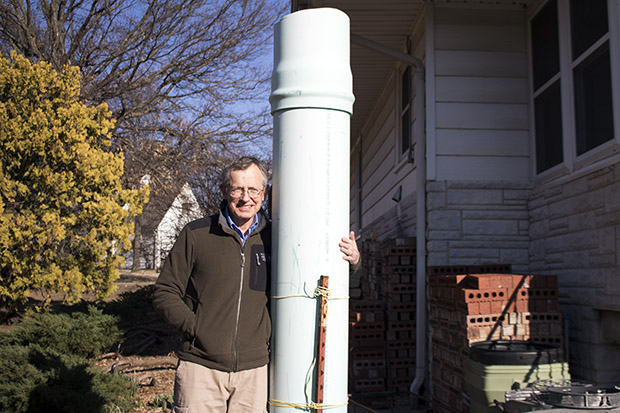 Jack Romine stands near a makeshift chimney state inspectors installed over an abandoned, leaky well that was discovered near his home in Bartlesville, Okla.

Oklahoma has hundreds of abandoned oil and gas wells, the byproduct of a century of petroleum production. Left unrepaired, many of these wells can endanger people and the environment. The state has a fund to plug abandoned wells, but some of that money has been diverted due to budget cuts.

Such an oil-field discovery would be welcomed in the boardroom of an Oklahoma energy company, but this natural gas is coming from a well the preschool teacher doesn’t own. In fact, Romine didn’t even know the well was there.

“I just wanted it to be like The Clampetts,” Romine says, laughing. “You know, bubbling oil, but I got gas.”

The well beneath Romine’s property, on the edge of a wooded neighborhood in Bartlesville, Oklahoma, isn’t profitable — it’s a problem. His home is situated on a slope. When it storms, rainwater tends to flow across a patch of lawn on the side of his house. Romine said a small piece of metal has always poked out of the ground in that side-yard, but one rainy day he noticed the object was bubbling.

“It keeps bubbling,” he says.

Romine called his local gas utility, but the bubbling wasn’t coming from a leak in a service line. The utility called the Oklahoma Corporation Commission, whose inspectors determined the piece of metal was evidence of an abandoned, unplugged well.

The bubbling, inspectors wrote in a state filing, suggests the well is actively “purging a small amount of gas to the surface” — a “serious threat.”

Not if, but when

The abandoned well Romine unwittingly discovered and more than 650 others across the state need to be plugged. The companies that operated these wells can’t be found or just don’t exist anymore.

“Many times you’ll never find a responsible party because these wells, we may not even have any records on them,” says Corporation Commission spokesman Matt Skinner. “They may date back a hundred years before record-keeping was required.”

Skinner says abandoned wells are regularly discovered across the state especially in areas, like Bartlesville, that experienced oil booms in the 1920s and 1930s. Many operators declared bankruptcy, went bust and disappeared. The oil and gas wells they left behind were capped and plugged — with drilling mud.

“As our field inspectors say, with a mud-plugged well, it’s not a question of if it’s going to leak, it’s when,” Skinner says.

And when the wells do leak, toxic saltwater, oil and natural gas can contaminate sources of drinking water and seep to the surface, polluting the ground and endangering the health and safety of residents.

If an owner can’t be found and forced to make fixes, the state has to hire a crew to plug the well. It’s expensive, averaging about $17,000 per well. Complicated plugging jobs can cost more than $100,000.

The dedicated state funding that was set aside to repair and plug abandoned wells is now being diverted, Skinner says.

The Commission, like many state agencies, received a small budget cut during the 2015 legislative session. To make up the 5.5 percent reduction, the Legislature directed the oil and gas regulator to dip into the well-plugging account.

Another complication is that money for the plugging account comes from a fraction of a percent tax on oil and gas production, which Skinner says is shrinking alongside slumping oil prices. The fund itself is set to expire at the end of 2016, but lawmakers appear poised to pass legislation extending the program.

The commission is still paying to plug the most hazardous abandoned wells, and it is maintaining a cushion of cash to pay for well-plugging emergencies. But the commission has “slowed the plugging” of abandoned, unplugged wells that don’t pose an immediate threat to public safety, Skinner says.

Back in Bartlesville, Jack Romine walks up to a giant plastic pipe sticking out of his yard.

The faded, mint-green tube is 10 feet tall and as thick as a tree trunk. The state installed the makeshift chimney to funnel the bubbling, flammable natural gas purging from the abandoned well away from Romine’s home.

The abandoned, leaky well beneath Romine’s property is one of the state’s highest priority plugging projects, records show. Still, Romine says the makeshift chimney has been here for months, and he’s heard no word on when the well will be repaired.

Romine is upbeat, but he and his wife get excited every time a strange car or pickup truck turns onto their street. They’re hoping it’s someone the state sent to plug this leaky well.

“When they said the emissions, or whatever you call it, was high enough to be concerned about, then I began to think, yeah, well maybe I ought to not laugh at it so much,” Romine says.