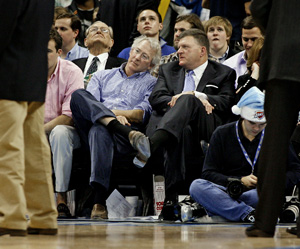 It’s unclear whether the wreck is related to McClendon’s indictment on Tuesday on charges he masterminded a conspiracy to rig the bidding process for oil and gas leases in northwest Oklahoma. He was due to appear in court later in the day on Wednesday.

“He pretty much drove straight into the wall. There was plenty of opportunity to correct or go back to the roadway. That didn’t occur,” police Capt. Paco Balderrama said.

The car was engulfed in flames and was so badly burned police could not determine if McClendon was wearing a seatbelt, Balderrama said.

The posted speed limit is 40 mph, and Balderrama said McClendon was traveling well over the speed limit.

McClendon founded Chesapeake Energy, making billions of dollars during the height of the U.S. shale gas boom. He founded American Energy partners after he was ousted from Chesapeake in 2013.

Despite those troubles, it’s impossible to overstate McClendon’s role in the revitalization of Oklahoma City. From Oklahoma City mayor Mick Cornett:

“We will always appreciate and remember Aubrey’s generosity and civic pride in our community – from his support of countless local charities to the Oklahoma City Thunder to the Boy’s and Girl’s Club of OKC to the arts.

“His philanthropic investments in local schools and universities, the Boathouse District and throughout our city consistently raised the standards of what Oklahoma City could be.”

And McClendon’s influence on the American energy industry helped shape the explosion in hydraulic fracturing, as fivethirtyeight.com‘s Ben Casselman tweeted: 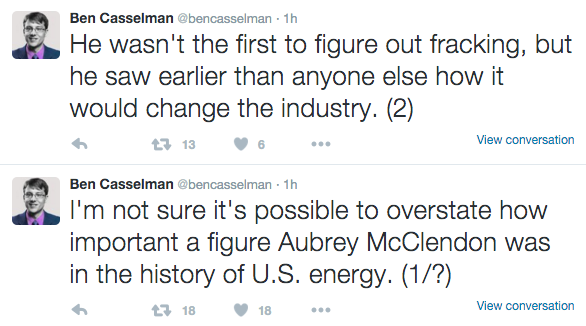 Reaction to McClendon’s death continues to pour in. A statement from American Energy Partners, which he founded in 2013, says the company is in mourning.

“We are tremendously proud of his legacy and will continue to work hard to live up to the unmatched standards he set for excellence and integrity,” the statement reads.

“Aubrey will be remembered for his innovations in the oil and natural gas industry, his civic generosity and being a driving force to help grow economic opportunities for Oklahoma. He was a visionary who raised the profile of Oklahoma City.”

Oklahoma’s oil and natural gas industry has lost a true visionary whose accomplishments will long go unmatched. His passing is a great loss to the industry, state and city he vigorously and loyally supported.