Gene Howell, an employee at Reeder's Auto and Tire in midtown Tulsa, Okla.

The Promise and Peril of $1 Gasoline in Oil-Rich Oklahoma 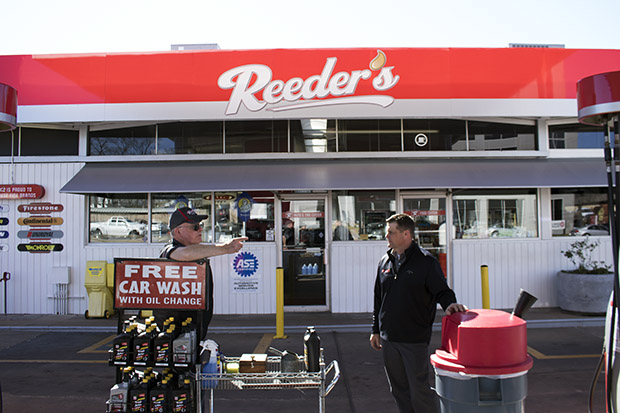 Crashing crude oil prices are fueling big bargains for American motorists, who are driving away with tanks full of inexpensive gasoline. Today, the national average is $1.71 for a gallon of regular unleaded. Oklahoma could be one of the first places in the country to see gas prices dip below $1 a gallon.

A shiny black Mercedes pulls up near a pump, the bell rings and Ross Ledbetter tells the driver to pop the hood.

The oil level checks out and the driver speeds away from Reeder’s Auto and Tire in midtown Tulsa having received the services of a mechanic — without spending a dime.

“It was just a courtesy,” Ledbetter says. “They had a concern and we could check it real quick. Good people and good service drive business so we try to be good people first.”

Ledbetter is the co-owner of Reeder’s, which has been his wife’s family’s business since 1961. Reeder’s is well known for its full-service attendants, on-site mechanics and retro-petrol branding. It’s a destination, but at the end of the day, it’s still a gas station: The price on the sign near the street means everything.

“There’s not many businesses out there that put their posted price of their product, everyday, on a sign, on the street corner, for everybody to see,” he says. 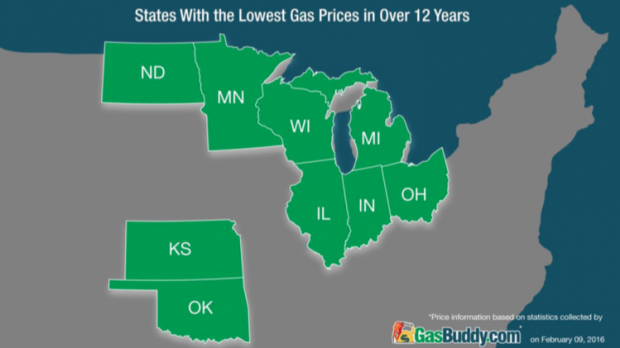 Click here to read an analysis by petroleum experts GasBuddy that fuel prices throughout the middle of the U.S. recently reached 12-year lows and could dip below $1 a gallon.

Speer says U.S. refineries have gorged on cheap crude to make the largest stockpile of gasoline in 22 years. In land-locked states like Oklahoma, there’s no place for all that extra gasoline to go.

“In the Gulf Coast, if you produce too much gasoline you can easily put it on massive cargo ships and ship it to anywhere in the world,” says. In mid-continent states, however, “you almost have to burn through it.”

Speer thinks gasoline prices in the middle of the country — from Oklahoma to North Dakota and east as far as Ohio — could fall below $1 a gallon.

Analysts at the Oil Price Information Service say the last time Oklahoma drivers filled up with $0.99-cent gas was on Dec. 28, 2001.

At Reeder’s Auto and Tire, the lunchtime crowd lines up to fuel up and retrieve cars left with mechanics before work. Ledbetter pushes his team of about a dozen to learn customers’ names and give them personalized service, but nothing has a bigger impact on his bottom line than the price on his sign.

Ledbetter says low oil prices have been good for retail gasoline sales. It means more customers with more money to spend — maybe on a car wash or a snack. Ledbetter says he’s seeing other business savings, too. Many of the lubricants and other chemicals his mechanics use are made from oil. And those products are getting a bit cheaper.

“It makes anybody happy when they get something for a lesser price,” he says. “Now, of course, that has all kinds of repercussions on the other side, you know, in a state like Oklahoma, where a lot of the tax revenues come from it.”

“Everyone was looking at these very high inventories for gasoline in states like Oklahoma and wondering how in the heck will anyone be able to burn through that,” Speer says. “Well, the refiners have their own answer — and it’s to make less gasoline.”

Even if longer-term numbers make it clear that refineries indeed are curbing gasoline production to reduce supply and boost prices, Speer says it could take a long time for oil and gas companies to follow suit.