Oklahoma Geological Survey seismologists and representatives from the Corporation Commission lead a public meeting on earthquakes held in March 2015 in Medford, Okla.

Former Seismologist: Reluctance to Act on Earthquake Science Was ‘Ingrained’ at State Agency 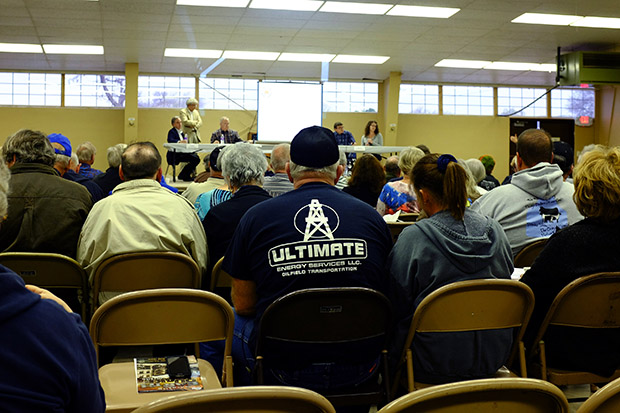 Oklahoma Geological Survey seismologists and representatives from the Corporation Commission lead a public meeting on earthquakes held in March 2015 in Medford, Okla.

A former research seismologist with the Oklahoma Geological Survey says agency leaders and other state officials fostered a culture of hesitation and reluctance to act on science suggesting the state’s earthquake boom was linked to oil and gas activities.

In an interview with Union of Concerned Scientists writer Pamela Worth published Tuesday on The Huffington Post, Amberlee Darold, who left the OGS to take a job at the U.S. Geological Survey, says she was “surprised” by the silence from state officials:

Darold’s frustrations echo those of another OGS seismologist, Austin Holland, who also left the state for a USGS post. Holland has acknowledged pressure from the oil and gas industry and top leaders at the University of Oklahoma, which hosts the state agency and has cozy relationships with executives at oil and gas companies.

Darold says she “became increasingly frustrated by the politics” of doing solid scientific fieldwork, while also answering questions from reporters and frightened members of the public and “delivering bad news to politicians,” HuffPo reports:

“We were persuaded to not be so open when giving public presentations or speaking to the media,” Darold says. “We would get reprimanded by the director, and/or the dean, if an article came out that mentioned fracking or wastewater management in conjunction with earthquakes.”

By April 2015, state officials — for the most part — had reversed course and publicly acknowledged the link between oil-field wastewater injection and the earthquake uptick, a move that led to a more strident response from state regulators, which Darold supports:

“If only industry had started doing this in 2009, when they started noticing the uptick,” says Darold. “It’s never too late, but certainly they’d be a lot further ahead of the game than they are now.”

As she notes, regulations won’t help unless geologists can determine which injection sites are triggering which fault lines. Other states that have shut down their wells have seen a dramatic decline in earthquakes; while the governor and/or the OCC could order a shutdown, it’s unlikely that they will without some kind of agreement from industry.

“I still have faith that they’ll continue working together to come up with a solution, with the community in mind,” Darold says. “Industry is so important to the state–but at the same time, so are your citizens.”