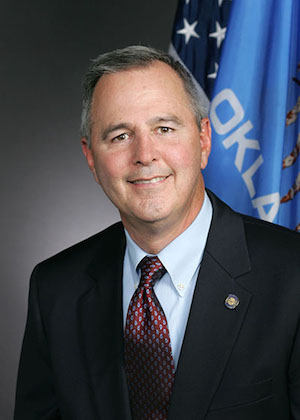 The first company to apply for and receive the exemption was Uplands Resources Inc. of Tulsa. At the time, Bingman was the company’s land manager. He currently works there as vice president of land and operations.

Waterflooding is an enhanced recovery process where water is injected underground to increase production from oil reservoirs. The tax break’s cost to the state is small, Oklahoma Watch’s Warren Vieth and Mark Lash report:

According to the Oklahoma Tax Commission, the waterflood tax break reduced state revenue by an estimated $2 million during the 2013-2014 fiscal year. That’s only a drop or two of the estimated $901 million budget hole currently facing state lawmakers.

And, since the tax break was available to all oil companies, it doesn’t appear to violate state ethics rules, according to Oklahoma Watch.

The waterflood tax exemption was not included in a list of 75 business incentives that will be presented to the state’s new Incentive Evaluation Commission for possible scrutiny. The panel will refine the list and begin its tax break reviews as soon as all seven members are appointed.

But Bingman said he would have no objection to putting the waterflood break on the review roster.

“Absolutely,” he said. “Every tax credit needs to be looked at. Everybody’s got to be subject to the same scrutiny. The sooner, the better.”