After Weeks of Resistance, Oklahoma Oil Company Agrees to Shut Down Wells Near Earthquakes 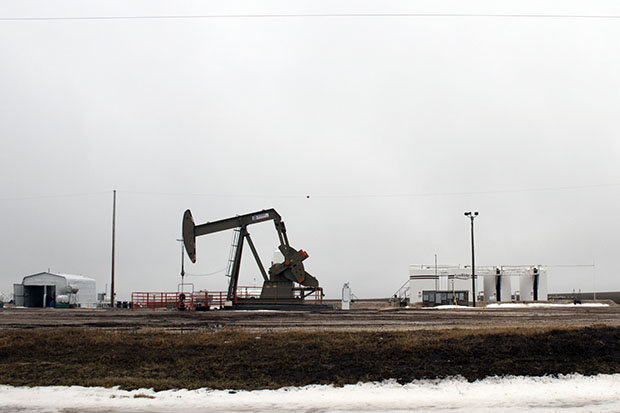 SandRidge Energy has agreed to shutter some disposal wells in earthquake-prone northern Oklahoma in a settlement that avoids legal action by state oil and gas regulators.

Financially strapped SandRidge had defied directives from the Oklahoma Corporation Commission to voluntary shut down disposal wells in shaky areas near the towns of Byron, Cherokee and Medford. The commission had prepared a court filing to force SandRidge to comply with the directives, but in a settlement announced Wednesday, the company agreed to shut down three wells and convert four into monitoring wells for an earthquake-related research project spearheaded by the Oklahoma Geological Survey.

“As reiterated throughout the process, we worked closely with the Oklahoma Corporation Commission, addressing this complex issue with science as our guide. The directive achieves both significantly reduced disposal volumes in the area of interest and a further commitment to scientific research through significant new data collection in collaboration with the [Oklahoma Geological Survey].”

The agreement avoids a “courtroom standoff” that could have tested regulators’ authority to act on earthquake concerns, but the settlement is a trade-off, EnergyWire’s Mike Sorgahan reports:

Under the deal, SandRidge will be allowed to inject 7 percent more wastewater than if it had complied with the December directive, but it is closing one more well than the agency requested earlier.

The industry praised the deal.

“It clearly demonstrates that the oil and gas industry takes our responsibilities seriously as corporate citizens and community partners to develop and use the most current science available to ensure we are making smart and responsible decisions regarding our operations,” Chad Warmington, president of the Oklahoma Oil and Gas Association, said in a statement.

One Oklahoma lawmaker who has been critical of the state and industry’s response to the oil and gas-linked earthquake boom, State Rep. Cory Williams, D-Stillwater, said the agreement rewarded defiance.

“It’s a 7 percent bonus to SandRidge,” Williams said. “This gives them quite a bit of time.