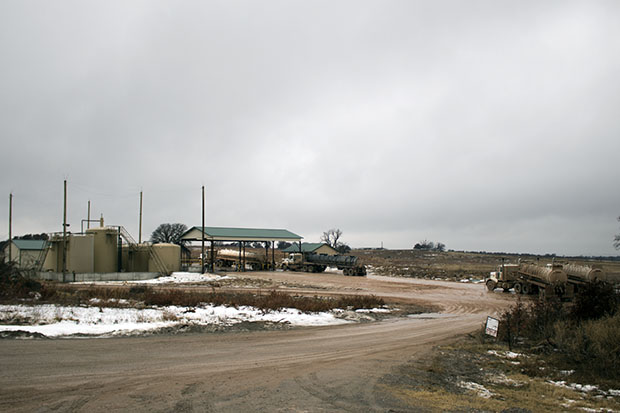 A string of widely felt earthquakes is rattling residents and seismologists, who are warning that parts of Oklahoma could be primed for more severe shaking.

More than 5,700 earthquakes shook the state in 2015 — a record year of seismic activity in Oklahoma. The New Year is off to a shaky start.

The recent earthquake outbreak started with a pair of early-morning quakes near Edmond on Dec. 29, 2015 and New Year’s Day. The 4.3 and 4.2-magnitude temblors woke many residents and knocked out power for thousands. Similarly strong shaking continued the following week in northwestern Oklahoma, near the small town of Fairview.

“This is definitely unprecedented,” says Daniel McNamara, a research geophysicist at the U.S. Geological Survey’s National Earthquake Information Center in Golden, Colo. “I’m freaked out and I don’t even live there. It’s just incredible. Really — I’ve never seen anything like it.”

McNamara has authored several peer-reviewed papers that add to a growing list of scientific evidence suggesting Oklahoma’s earthquakes are likely linked to the oil industry practice of pumping wastewater from drilling into underground disposal wells.

The area that’s shaking near Fairview is more than a hundred miles away from the earthquake activity near Edmond. The two places are far apart geographically, “but geologically they’re in all the same fault system,” McNamara says.

That fault system is called the Nemaha. The other major, seismically active fault line in Oklahoma is known as the Wilzetta. Both systems have larger, primary faults that splinter out into smaller faults known as splays.

“Think if it like shattered glass,” McNamara says. “There are faults radiating in all directions.

The Wilzetta system produced Oklahoma’s largest earthquake on record — the 5.7-magnitude event that injured two people near the town of Prague in 2011. It’s also responsible for earthquakes near the enormous U.S. oil hub in Cushing. That shaking is worrying the energy industry, the Department of Homeland Security and McNamara, who sounded alarms last fall. McNamara says researchers have less information about the Nemaha — especially in northwestern parts of the state.

Oklahoma’s earthquake boom began in 2009, and scientists and state officials have worked for years to piece together detailed maps about fault systems that, previously, weren’t a high priority for many besides oil and gas companies. The energy industry — which has the bankroll and financial incentive to produce detailed maps and information on underground formations — has provided data to fill in gaps.

In many cases, earthquakes themselves provide data that is painting a more-complete picture of the faults and rock layers underneath Oklahoma, McNamara says. The recent temblors near Edmond, for example, helped reveal to seismologists a previously unknown splay of the Nemaha.

A separate splay of the Nemaha is likely the source of the earthquakes near Fairview, but McNamara says scientists have less information about the faults in northwestern Oklahoma.

“The earthquakes are occurring off of the known faults, but that’s just an indication that they’re connected at depth and we don’t have enough information,” he says.

The magnitude of an earthquake is related to the size of a fault. The bigger the surface area, the bigger the potential quake. Based on the little data that’s available for the faults near Fairview, McNamara thinks a 5.0-magnitude quake is possible. The faults near Edmond are likely large enough to produce a magnitude six.

The Edmond quakes have occurred in “regions that we really get concerned about because you have potential exposure of a fairly populous area,” he says.

To be clear: McNamara is not predicting a 6.0-magnitude earthquake will strike Edmond. Nothing is imminent. But the potential is there. Forecasting earthquakes is always a huge challenge, and Oklahoma’s seismic boom is even trickier because it appears human activity triggered it.

McNamara says most of what we know comes from natural shaking. It’s still not clear if the same rules apply to earthquakes linked to decades of wastewater injection by oil and gas companies.

A townhall-style meeting organized by Republican Rep. Lewis Moore of Edmond will be held from 4:30 to 6:30 p.m. Jan. 14 in Ballroom A&B at the Nigh Center on the campus of the University of Central Oklahoma. The meeting will include presentations from the Oklahoma Geological Survey, U.S. Army Corps of Engineers, Oklahoma Department of Transportation and the Oklahoma Homebuilders Association.

A capitol hearing organized by Democratic Rep. Richard Morrissette of Oklahoma City will follow from 9 a.m. to 4:30 p.m. Jan. 15 in Room 412C at the state Capitol. Speakers include Todd Halihan, a hydrogeology professor at Oklahoma State University, Scott Poynter, an Arkansas attorney representing Oklahomans who have filed earthquake-related lawsuits against oil and gas companies, petroleum geologists Bob Jackman and Michael Root and Johnson Bridgwater, director of the Oklahoma chapter of the Sierra Club.

“Most of the system is now in a critically stressed state and all you need to do is add slight stress changes in areas and you get — earthquake,” McNamara says.

The stress changes could come from other disposal wells. Or natural events. McNamara says there is some preliminary evidence to back theories that one vulnerable fault slipped under the pressure of a lake that rapidly filled from stormwater.

“Again, we’re not trying to say wastewater disposal is not a factor here,” McNamara says.

The Oklahoma Corporation Commission is regularly directing oil companies to shut down or reduce activity at disposal wells in shaky regions — including areas near Fairview and Edmond.

McNamara says those efforts have reduced seismic activity in some spots. Still, the earthquake problem seems a long way from being solved.

“I just think that residents of Oklahoma really need to think about being prepared for strong shaking,” he says.

Oklahoma lawmakers seem more prepared than ever to take on the earthquake problem and its politically complicated connection to the state’s most economically vital industry. The 2016 legislative session starts in February, and both political parties have organized big, public earthquake meetings.