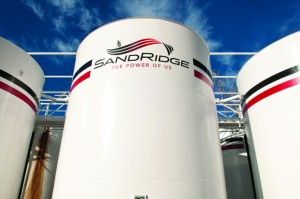 Sandridge Energy has been defying directives from the Oklahoma Corporation Commission to shut down six disposal wells in north-central Oklahoma. Commission staff are finalizing a legal filing that, if approved, could modify permits and halt operation of the wells.

Sandridge’s refusal to comply is a closely watched challenge to the state’s authority. The company’s earthquake conundrum is one that more drillers could face this year if oil prices continue to languish at low levels. Some of those, like Sandridge, need disposal wells to keep producing crude.

Sandridge may be reluctant to shut down the wells because it needs every bit of revenue it can generate at this point, said Jason Wangler, an analyst at Wunderlich Securities. Even if Sandridge continues to pump all the oil and gas it can, the company could run out of cash in 2016, he said.

The company has said that it isn’t resisting regulators because of its financial position.

“Any directive by the Oklahoma Corporation Commission to the industry should be based on solid science—a position that is independent of our financial condition,” said David Kimmel, a spokesman for Sandridge.

Disposal wells are a key part of oil production, especially in Oklahoma, where many underground formations produce 10 barrels of toxic saltwater for every barrel of oil. Record-low oil prices have tightened margins, a squeeze particularly felt at financially troubled Sandridge, Ailworth reports:

The price of crude-oil has crashed from over $100 a barrel to less than $40 in the last 18 months, forcing many debt-laden energy companies into pumping as much as possible so they can make payments to their creditors and stave off bankruptcy. But producing more oil and gas means producing more wastewater—and finding ways to dispose of it.

There are alternatives. Some oil-field service companies load wastewater into trucks and haul it to special treatment plants, where it is cleaned for reuse—sometimes recycled back into oil-and-gas operations or, in some cases, used to water crops. But those options are usually more expensive than using disposal wells.

Sandridge warned investors last fall that if it loses even some of its ability to use wastewater disposal wells it may be forced to significantly dial back production, which would cut into sales, according to filings with the U.S. Securities Exchange Commission.