Jay Storm, left, the completions superintendent for Eagle Energy Exploration, and a service company worker oversee the plug-back of the George No. 1 saltwater disposal well. 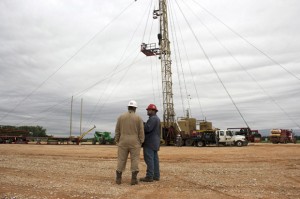 An Eagle Energy Exploration disposal well site in May 2015, where workers plugged-back an Arbuckle disposal well regulators said was drilled too deep.

Researchers studying Oklahoma’s energy industry-linked earthquake surge and state regulators eager to quell the shaking have circled the wagons around a specific class of wells companies fill with wastewater and other fluid byproducts of oil and gas production.

Once it’s injected, these disposal wells transport waste fluid from the surface deep underground, often into the Arbuckle formation.

This formation is popular — and poorly understood. But scientists, state officials and the oil and gas industry are in a rush to figure it out, The Oklahoman‘s Adam Wilmoth and Paul Monies report in a pair of stories. Here are some key questions about the Arbuckle formation:

Why don’t we know more about the Arbuckle?

Oil and natural gas companies have drilled hundreds of thousands of wells throughout Oklahoma since before statehood. For most of those wells — at least most of those drilled within the past 75 years or so — companies have collected rock samples and well-log data, detailing all the rock layers between the surface and the target rock.

But since the Arbuckle and basement do not produce oil and natural gas and are below all producing layers, companies haven’t put much effort into determining the rock’s characteristics.

Does wastewater stay in the Arbuckle?

“The main question is: Does it leak?” said Jeremy Boak, director of the Oklahoma Geological Survey. “When we put water in there, is it able to drain away into the underlying basement where most of the earthquakes are caused? If it is co-mingling, even if not that much water moves, water pressure can be transferred” …

… Until three years ago, the property was considered a blessing and few bothered to think about why the rock would so easily accept so much water.

Leading theories focus on geology, including changing microscopic makeup of elements in the rock layer and uplifts.

Now, however, there are questions as to what is happening to the water and whether it could be draining to other layers.

Whatever is happening, [state hydrologist Kyle] Murray
said it’s unlikely that the water is simply draining into the underlying basement rock.

Why is the Arbuckle under-pressured?

The Arbuckle’s biggest benefit may also be its greatest unknown. The rock is naturally underpressured, meaning it more easily absorbs water than other layers where water has to be pumped in at high pressure.

“It’s not very common. I don’t know that any others in Oklahoma are underpressured,” Murray said. “I don’t think anyone has a good explanation for it, even here at the survey. My colleagues are rooting for information and trying to understand it. We don’t have a good explanation at this point. There are a couple of different geological mechanisms that could have led to that being underpressured, but I don’t think any has been proven to be correct. It may be a combination.”

How much wastewater has been injected into the Arbuckle?

Oklahoma oil and gas producers inject wastewater into other formations, but by far the largest volumes — more than half — go into the Arbuckle. The total volume disposed into Arbuckle layers in 2014 would more than fill Norman’s Lake Thunderbird.

Which companies are doing the injecting?

SandRidge accounted for about one-third of all the produced saltwater disposed into Arbuckle zones in 2014, according to an analysis of volume data from the Oklahoma Corporation Commission.

Chesapeake Energy Corp. injected about 14 percent of the saltwater into the Arbuckle in 2014, with Devon Energy Corp. accounting for about 10 percent, according to the analysis by The Oklahoman.

Why can’t oil companies just put the wastewater somewhere other than the Arbuckle?

Stanford University professor Mark Zoback has suggested that companies reinject back into the layer they produce the water from. Zoback is a member of Oklahoma’s Coordinating Council on Seismic Activity and has studied the state’s earthquake activity.

Some companies, however, have said that plan would hurt oil production throughout the region.

“It’s always easy for the guy who doesn’t have to do it,” said Kim Hatfield, chairman of the regulatory committee at the Oklahoma Independent Petroleum Association.

Pumping water back into a producing formation could dilute surrounding wells, reducing their oil production and increase production costs, Hatfield said. Shale layers are too dense to economically accept such large quantities of water.

Is the crackdown on Arbuckle disposal wells working?

The state averaged 4.8 earthquakes of magnitude 2.8 or greater per day in July. That number has decreased to 3.5 per day. While the overall rate has dropped, isolated areas — including Cushing and parts of Logan County — have seen increases. The biggest reduction has been in Grant and Alfalfa counties.

While the rate appears to be slowing, it is still unclear how much of the decline is because of regulatory changes and how much is because oil and natural gas drilling activity has slowed, reducing the volumes of water produced and disposed of.