Tanker trucks unloading oil at a Phillips 66 terminal in Cushing, Okla., home to the largest commercial crude oil storage in the U.S. 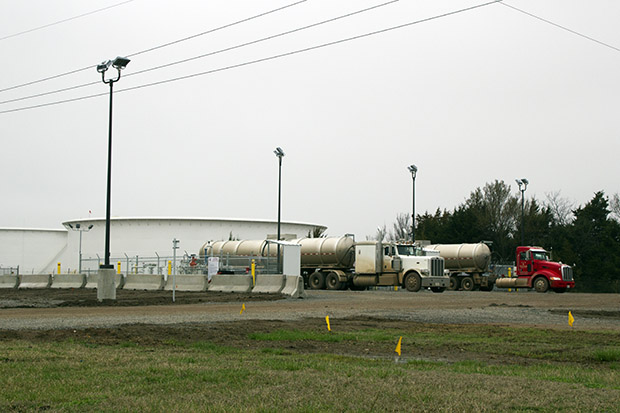 Tanker trucks unloading oil at a Phillips 66 terminal in Cushing, Okla., home to the largest commercial crude oil storage in the U.S.

Phillips 66, a refiner with 700,000 barrels of storage capacity in Cushing, Okla., “has overhauled how it plans for earthquakes, a sign U.S. energy companies are starting to react to rising seismicity around the world’s largest crude hub,” Reuters’ Liz Hampton reports.

The changes include new protocols for inspecting the health of crude tanks, potentially halting operations after temblors, and monitoring quake alerts.

The revisions, fully implemented in 2015 and first detailed to Reuters this past week, appear to mark the most significant acknowledgement by a major energy company that its seismic procedures were recently updated.

They also come as some researchers say tougher standards for energy infrastructure such as pipelines and tanks could be needed to handle an uptick in quakes since 2009 in Oklahoma.

Earthquake activity near the Cushing hub has alarmed federal scientists and officials at the U.S. Department of Homeland Security.

In October, David McNamara with the U.S. Geological Survey warned in a peer-reviewed paper that the faults in Cushing are similar to those that have produced earthquakes strong enough to damage oil storage tanks and other infrastructure at the hub, which currently holds more than 50 million barrels of crude. If the hub were damaged or oil storage and transport activity were disrupted, officials worry the effect could ripple through the U.S. energy market.

Enbridge Energy, one of the largest operators at Cushing, told StateImpact in October that earthquake activity had prompted field inspections of storage tanks and other equipment. No earthquake-related damage has been reported in Cushing, and many of the massive storage tanks — some large enough to hold an airliner — are built to national construction standards that account for some shaking.

To be sure, most oil companies test the integrity of tanks on an on-going basis and many told Reuters their tanks are built to the latest construction standards and building codes.

But some scientists are questioning whether standards should be tightened.

Engineers told Reuters most tanks in Cushing rank in Seismic Use Group 1, the weakest classification in API standards. TransCanada Corp said its seven Cushing tanks are in SUG 1.

The largest quake in Oklahoma was 5.6, a level with potential to damage tanks. Tanks normally have containment berms to catch leaking oil.

“Anything more than a 5.0 you have to worry about a little more,” according to Muralee Muraleetharan, a civil engineering professor at the University of Oklahoma.