Why Quakes and Shaky Finances Could Crumble an Oklahoma Energy Company 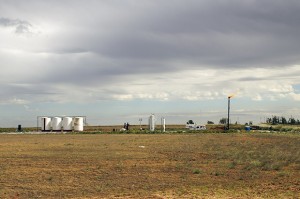 As SandRidge Energy struggles with $4.6 billion in debt and a faltering stock price that’s threatening its listing on the New York Stock Exchange, the Oklahoma City oil and gas company is facing another problem: Earthquakes and new regulations designed to slow the shaking:

SandRidge Energy Inc.’s most important assets are at the epicenter of Oklahoma’s ongoing earthquake problem. The driller’s precarious financial position, combined with the risk it faces from temblor swarms near its wastewater injection wells, could cause the company to become insolvent if regulators shut down its disposal wells.

SandRidge is “the only independent, publicly traded driller that doesn’t have a major stake” in oil and gas formations outside of northern Oklahoma and southern Kansas’ Mississippi Lime formation, which, as Terry-Cobo reports, “isn’t a great place to get oil and gas:”

But SandRidge and a few others figured out how to fracture the porous limestone and inject wastewater to a much deeper layer, the Arbuckle. But what makes the Mississippi Lime and Arbuckle rock formations such a successful combination also makes them an earthquake hazard.

Disposal wells are the key to making the Mississippi Lime play economical.

SandRidge invested more than $200 million in infrastructure to ship salty, toxic wastewater from petroleum wells through pipes to disposal wells nearby. One in six wells the OCC put under a microscope belongs to SandRidge, accounting for nearly 85 percent of the company’s 125 active disposal sites.

If the Oklahoma Corporation Commission requires dramatic cutbacks for all of SandRidge’s wells, the company might not be able to afford to move the water elsewhere. One geologist estimated that reducing the volume from one disposal means redistributing to about four wells to reduce earthquake risk. And SandRidge can’t produce oil and gas if it can’t dispose of all the wastewater.

SandRidge wouldn’t discuss the impact of disposal well rules, Terry-Cobo reports, “but the company has admitted regulatory adjustments could cause changes to its operations.”

In an annual SEC filing posted Nov. 5, the company noted that Texas, Oklahoma and Kansas have made changes to disposal well programs. It did not provide details about how many of its wells face scrutiny. The risk statement noted that any new laws, regulations or directives that restrict wastewater disposal or that shut down disposal wells could also force the company to shut down a substantial number of oil and gas wells. That could have a material and adverse effect on the company’s business, financial condition and operational results, according to the filing.