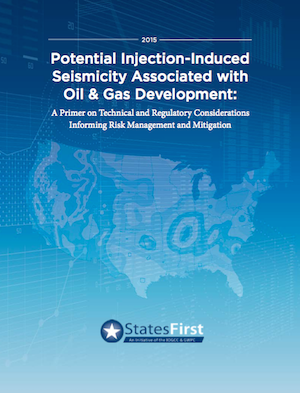 A group of state energy officials, researchers and industry experts issued a report Monday offering guidance on how to handle earthquakes triggered by oil and gas activity.

The 148-page report from StatesFirst — a partnership between state officials and the Interstate Oil and Gas Compact Commission and Ground Water Protection Council — stops short of offering model regulations, but “represents perhaps the most candid discussion on the topic” since researchers started connecting earthquakes in Oklahoma and other states to fracking and waste-fluid disposal wells, the Associated Press reports:

It includes descriptions of how states handled various seismic incidents around the country, including their public relations strategies, and matter-of-factly references links between fracking or deep-injection wastewater disposal and earthquakes. Previously, public admissions had been fuzzy in some cases.

That’s because each state’s laws and geography are unique, Ohio Oil & Gas Chief Rick Simmers, who co-chaired the effort, told The Associated Press. The report says, “a one-size-fits-all approach would not be an effective tool for state regulators.”

Simmers said the report is in the form of a primer, providing states with up-to-date scientific and technical data, case studies and several suggested approaches for detecting and managing the quakes.

A “handful of Oklahoma residents” have petitioned the U.S. Environmental Protection Agency to take over Oklahoma’s regulation of oil and gas disposal wells, The Oklahoman‘s Paul Monies reports. But Michael Teague, Oklahoma’s Secretary of Energy and Environment, says the EPA district that covers the state “isn’t interested in taking that step.”

“In Oklahoma, we are probably in this thing deeper than anybody else,” Teague said. “There have been no threats from the EPA. As a matter of fact, there has been tremendous cooperation from the EPA. Region 6 has received about a dozen petitions requesting EPA revoke Oklahoma’s primacy. Region 6 is not interested in that at all.”