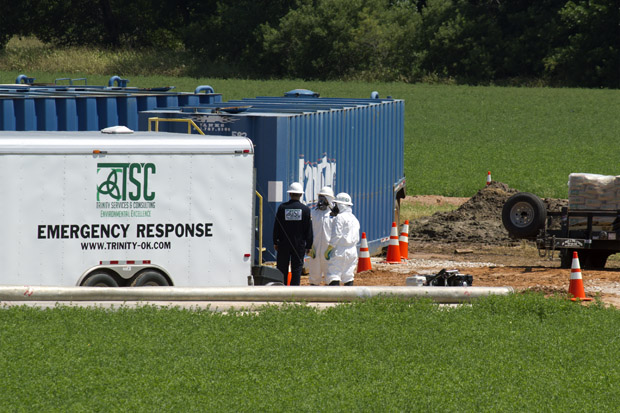 Crews work to contain and clean up 20,000 gallons of hydrochloric acid that spilled near a hydraulic fracturing site near Hennessey, Okla., in 2014.

Wastewater spills worsened as drilling boomed in major oil- and gas-producing states, a new year-long investigation from the Associated Press shows. Those states, including Oklahoma, rely on the oil and gas industry to self-report such spills and rarely fine or punish companies, the AP’s John Flesher reports.

In April 2013, a malfunctioning oil well in the countryside north of Oklahoma City caused storage tanks to overflow, sending 42,000 gallons of briny wastewater hurtling over a dike, across a wheat field and into a farm pond.

State regulators ordered the oil company to clean up as much of the spill as possible and repair the site. But they didn’t impose fines or other punishment against Moore Petroleum Investment Corp., a tiny company in Norman that operates only a few wells.

That “no-penalty policy” is standard practice in most oil and gas states, the AP reports:

“It’s almost a coddling relationship,” said Jill Morrison of the Powder River Basin Resource Council, an environmental advocacy group in Wyoming, adding that it takes large court judgments or settlements for companies to mend their ways. “The industry looks at spills as a cost of doing business.”

The AP examined data from 11 states that were responsible for more than 90 percent of the U.S. onshore oil production:

An Associated Press analysis of data from leading oil- and gas-producing states found more than 180 million gallons of wastewater spilled from 2009 to 2014 in incidents involving ruptured pipes, overflowing storage tanks and other mishaps or even deliberate dumping. There were some 21,651 individual spills. And these numbers are incomplete because many releases go unreported.

Though oil spills tend to get more attention, wastewater spills can be more damaging. And in seven of the 11 states the AP examined, the amount of wastewater released was at least twice that of oil discharged.

As oil and gas production increased, so did the spill total, the AP found:

The extent of land or water contamination is unknown; state and federal regulators make no such assessments. Texas, the nation’s biggest oil and gas producer, had the most incidents, 4,783, and the highest volume spilled, 62 million gallons.

Industry groups and regulators said much of the waste is recovered during cleanup operations or contained by berms near wells. Still, they acknowledged a certain amount soaks into the ground and can flow into waterways.

The drilling boom and state budget cuts have made enforcement and oversight even more challenging, according to the AP. For example, Oklahoma, which ranks No. 6 in total wastewater spill volume over the last five years, has 67 field inspectors to examine about 185,000 active wells and the Corporation Commission’s “Oil and Gas Division took a budget cut this year,” Flesher reports.

The AP’s investigation relied on data from reported spills, which government agencies acknowledge is limited:

… the accidents, which often happen in remote places and, unlike oil spills, don’t produce dramatic images of birds flailing in black goo and tourist beaches fouled. Regulators rely on private operators to notify them, and it’s not always required. For example, Oklahoma exempts reporting of most spills of less than 10 barrels, or 420 gallons.

The loudest whistleblowers are often property owners, who must allow drilling access to their land if they don’t own the mineral rights.

“Most ranchers are very attached to the land,” said Jeff Henry, president of the Osage County Cattlemen’s Association in Oklahoma. “It’s where we derive our income, raise our families. It’s who we are.”