The U.S. Geological Survey is trying to model the potential hazards of oil and gas-linked earthquakes and how to account for them on national maps, like this preliminary version. 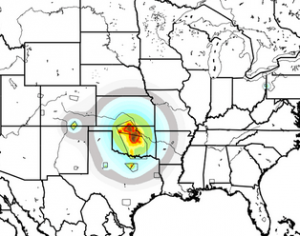 The U.S. Geological Survey is trying to model the potential hazards of oil and gas-linked earthquakes and how to account for them on national models, like this preliminary map.

A boom of earthquakes linked to oil and gas production “has and will continue to have sharp economic consequences” in Oklahoma and other states experiencing man-made seismicity, Standard and Poor’s Rating Services analysts write in a recent report.

The seismic activity may be a liability for energy companies and the oil and gas industry, and will affect home and business owners, mortgage lenders and “investors exposed to real estate” in seismically active areas, according to analysts Andrew Foster, Robert Radziul and Stephen Anderberg.

It’s unclear who will be liable in any given circumstance. However, future risks clearly exist. At present, U.S. homeowners don’t widely hold earthquake insurance, and it’s generally not a lender requirement (about 10% of homeowners in California have policies, and 7% was the nationwide average in 2014, according to the Insurance Information Institute). Therefore, insurers’ potential exposure is relatively small, while owners and lenders are uninsured against this risk.

The credit risk could also affect transportation, infrastructure and utilities, according to S&P’s analysis. The economic risk of man-made earthquakes is a lot like the dangers of climate change, the analysts write:

Thinking about increased credit risks from earthquakes is abstract, similar to analyses we have published on climate change and the increased frequency of natural catastrophes. Like the impact of climate change, many effects of increased earthquakes near to fracking are regional, making it difficult to assign a headline number for the potential cost for the country.  Also, like the climate change-related phenomena, although the lack of historical data on fracking makes modeling this future risk challenging, the risks should not be ignored.

One big factor for understanding fracking and its role in changing the U.S. economy will be the decisions of policymakers at the local, state, and federal levels. These bodies will enact laws and regulations concerning fracking in the context of supply and demand of natural gas and oil, economic growth agendas, and environmental concerns–not only in the U.S. but also globally. We believe policymakers also need to consider the credit implications regarding fracking when they develop laws and regulations. Any new policies or guidelines could help determine credit outcomes in the long-term, given fracking’s revenue potential, as well as the risks.

One reason oil and gas earthquakes could have such broad economic effects is due to the way “energy market trends interplay with real estate markets,” the analysts write:

Increased fracking and rising natural gas and oil supply in certain U.S. markets have had dramatic effects not only on energy exploration, drilling, and transportation but also on real estate investment due to increased sales, property values, and development to accommodate job growth. As economic activity related to shale drilling has grown, mortgage lenders have directed their strategies to take advantage of this growth through lending on retail, multifamily, and hospitality properties to name a few product types.