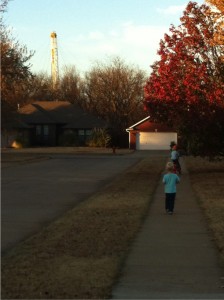 Stillwater resident Tammy Mix's sons play on the sidewalk as a drilling rig peeks above the tree line behind her Stillwater home in 2014.

After months of debate, drafting and deferring, the Stillwater City Council on Monday approved a stricter oil and gas ordinance.

The council unanimously approved the new rules, which were crafted with the input of residents, the energy industry and Senate Bill 809 — legislation that goes into effect in August preventing municipalities from enacting ordinances that ban fracking and other oil and gas activities, The Oklahoman‘s Adam Wilmoth reports:

The ordinance applies only to new wells. It imposes a 660-foot setback from the property line of “protected use” properties, including homes, churches, parks, schools, libraries and hospitals. It also forbids new structures being built within 400 feet of oil and gas wells put in after the ordinance becomes effective.

Ambient noise from drilling operations at the setback boundary will be limited to 69 decibels, which is about the same noise level as a vacuum cleaner. The ordinance includes higher variances from that sound level for limited periods of time.

SB 809 allows towns, cities and counties to enact “reasonable” restrictions on oil and gas activities. During debate on the legislation and more than a half-dozen similar bills, lawmakers and local government officials — including those in Stillwater — questioned the definition of “reasonable,” suggesting the vague term could lead to complicated, costly lawsuits and legal challenges.

“They did make very minor changes to it, but the ordinance itself is still significantly unreasonable,” said A.J. Ferate, vice president of regulatory affairs at the Oklahoma Independent Petroleum Association. “In spirit, it does not allow for oil and gas drilling in city limits. It’s essentially a ban.”

Bud Ground, a regulatory and environmental affairs consultant for the Oklahoma Oil and Gas Association, said the setback provision in the ordinance does not account for the fact that the footprint of a well pad can change over time, as the operations at a given site evolve.

“We understand the council’s concern about oil and gas activity encroaching on the lives of Stillwater residents, but the new regulations, as written, could be deemed unreasonable,” said Bud Ground, OKOGA’s regulatory and environmental affairs consultant. “This would prohibit new drilling within much of the city limits.”