Students who are considered homeless by Florida schools can be living in hotels, trailer parks, in campgrounds or doubled up with friends or relatives. And with as many as 71,000 or more homeless students in the state the challenges can extend beyond the kids and families to include the schools.

For most kids school is a place of achievement and learning, or just a place to socialize with friends. But for kids without stable living arrangements it can mean much more than that. 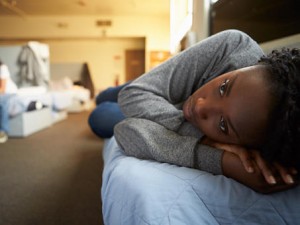 It's difficult to estimate how many students are homeless.

School districts want to help their homeless students, but first they have to know who they are.

Estimates vary greatly on how many homeless students there are in Florida. Some say the number is as high as one in every 18.

Ken Gaughan supervises social work for Hillsborough County Public Schools. They asked experts how many homeless students they may have.

Doing the math, that means as many as 11,000 students in Hillsborough County may be homeless.

But the state of Florida doesn’t agree. In 2013, it estimated the number in the county to be closer to about 3,200.

Bottom line – it’s really hard to get an accurate count of homeless students, especially as they get older when they couch surf or move around a lot.

Twelve-year-old Noah Holmes is one of an estimated 2,200 homeless kids in Pinellas County. He remembers the hotel where he and his family recently lived and he can describe it in just one word.

“Bad,” Noah said. “You can’t go at least ten feet without smelling weed or pot or something. Just, the place was bad.”

Noah, with his mother and seven-year-old sister Emma moved into the Homeless Empowerment Program or H-E-P in Clearwater. It’s a shelter and training program for homeless families and individuals.

Noah’s mother is Michelle Holmes. She brought them to HEP on the recommendation of their pastor after she lost her job and then their apartment.

“Without this I don’t know where we would be,” Holmes said. “I don’t want to say we would have been living on the streets but that may have been our next step.”

And she says she’s noticed a change in Noah since their housing troubles started.

“He’s very pouty and quieter,” Holmes said. “I definitely think it effects them at school. I don’t think they know how to express what to tell everyone.”

The American Psychological Association says as schooling for homeless children is interrupted or delayed, they are twice as likely to have a learning disability, have to repeat a grade or be suspended from school.
And there are the everyday challenges like transportation, food and clothing and getting homework done.

That’s where schools come in.

Ellen McLaughlin is in charge of a program at the Sarasota Y that helps homeless students enroll and stay in school.

“The best place for a homeless kid to be is in a school,” McLaughlin said. “They have safety, they have stability and they can make progress to their goals.”

McLaughlin acts as a liaison between homeless students and the school, helping them connect with social services, school buses, shelters and keeping up with school work. By federal law, every district has someone like her. And the law does more.

“The McKinney-Vento Act says that even if a child moves ten times they have the right to stay in one school all year, with transportation provided by the school district,” McLaughlin said.

But McLaughlin says the role staff and teachers play is also vital.

“We train teachers that these are their kids,” McLaughlin said. “To be successful they need stability and the teachers really embrace that. They do need to understand that it’s hard to do your homework when you’re in a shelter or in a car.”

Teachers and staff are trained to look for signs of homelessness so they can direct kids to help. Signs like changing schools a lot, sleeping in class, lost paperwork or always being behind. And McLaughlin says there’s another red flag.

“You often see kids hoarding food,” McLaughlin said. “Like, we might have an opportunity in one of our programs to give snacks. And, they want to take extras.”

Meanwhile, Noah Holmes says he is just glad his family is together. And he wants it to be a fresh start for all of them.

“I hope it helps my family get back on our feet,” Noah said. “Instead of just keep falling and falling. So we just move up from where we used to be.”

His mom is going through a six-week computer training class at HEP. She hopes it will improve her chances at finding a good job and a permanent home of their own.