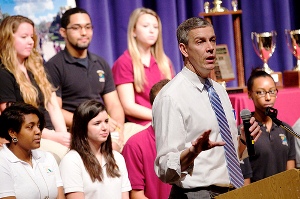 He chatted with StateImpact Florida about school discipline, testing requirements and how Congress is rewriting the federal No Child Left Behind education law.

Q: We are currently in the midst of a national conversation about race and policing following the deaths of several black men and women either in police custody or at the hands of police. Is this conversation extending to education and how is it?

A: It absolutely is and lots of different ways.

So I’ve spent time in Ferguson after the issues there. Spent time in Baltimore; recently been back there a couple times.

And it’s interesting. I think you know we have a lot of work to do ourselves.

We’ve been very, very public about the school to prison pipeline. Sometimes folks don’t like when I talk about that, but that is real.

Former Attorney General Eric Holder and I put out data from our civil rights data collection process that showed that across the country the school prison pipeline starts in pre-K, with three- and four-year-olds, with disproportionate numbers of young boys of color are being suspended and expelled.

And we have to challenge this status quo every day. We have to look in the mirror and deal with these issues in an open, honest way, and do everything we can to make sure all children, but children of color, young boys of color, are treated fairly and equitably and see school as an opportunity for success, not as something that is somehow out to get them.

What do we know about what effective discipline looks like in schools?

A: First of all, you have two fantastic superintendents. Alberto’s [Carvalho] doing a great job there in Miami-Dade, and I’m very biased, but Bob Runcie and I worked together in Chicago, I’m a huge fan of his. I think he’s fantastic. I actually just left him a few minutes ago at the Urban League conference.

So I’m very, very pleased with their work. We did a White House school discipline summit very recently and both districts were there. And that leadership encouraged saying ‘we’re not going to push these kids out to the streets. We’re going to work with them. And we’re going to figure out how we can help them be more successful and change their behavior.’ That’s a real profile in courage.

Q: Do we know that’s effective though? That schools are actually benefiting from this? Are those students still disrupting school if they’re they’re kept in school.

A: You know there’s lots of data there. And what’s been interesting to me is that — and this is, again, a little counterintuitive to some adults — but the more you really empower young people, particularly the high school level, to take ownership for the climate and culture of their schools.

So restorative justice. You know, peer juries. Working through these issues themselves.

And I’ve been to some high schools where it’s been amazing, and, you know, a year, or two, or three years ago were pretty violent places quite frankly. Where folks were scared. Where they weren’t safe. And young people themselves stepped up to deal with these issues and the climate has changed dramatically.

So again for adults that can be a little bit scary to release some power to young people. But if our students aren’t invested, if they’re not owning the culture and climate of schools, I don’t think we’ll ever be successful with anything.

Q: Congress is working on rewriting the federal education law best known as No Child Left Behind. What are you happy with in terms of what’s in the law right now and what are you disappointed with?

Education should be the ultimate bipartisan issue. Politics and ideology should go out the window. We should all be fighting for kids.

So, there’s a good-faith effort going on there. That is not true in the House. The House is a straight party-line vote by Republicans. So, that’s that’s not about policy, that’s about politics. So, I’m more encouraged by the efforts in the Senate.

So, we don’t know whether it will get to a good place or not. Probably 50-50.  But, we have a better chance, or at least a chance, that literally hasn’t existed for the past six and a half years in Washington. And we’ll know as we go into the fall whether this is really a serious effort that the president should be looking at or not.

Q: Are there any concerns that the changes to No Child Left Behind would tie the hands of the federal Department of Education in terms of how you guys could influence education policy around the country?

A: Well I think the best thing we can do is to partner with states.

And again, just to be clear, if they rewrite this law it’s really not about me or even this administration. It’s about the next four, five or eight secretaries. So anyone who is thinking for the short-term, that that’s that small thinking. That’s small ball.

No Child Left Behind was very prescriptive on what they told you to do, but very loose on goals. And we’re trying to turn that on its head. Be tight on goals. Make sure the students are truly college and career ready and are held to high standards.

But, be much, much looser on the means of getting there and give states and districts, you know, much more flexibility. And to think that somehow in Washington you can micro-manage what a kid in Miami-Dade, versus a kid in Alaska, versus a on a Native American reservation, what they need. To think that we know that best in Washington, would frankly be the height of arrogance.

So, holding folks accountable to a high bar, but giving lots of room for flexibility, for innovation, for creativity — I think that’s the right mix, or the right philosophy to go at this thing.

Q: One of the things likely to be included in the bill is a requirement for annual testing. Broward superintendent Robert Runcie argues schools only need periodic testing.

So why do we need annual testing?

A: I think it’s important for parents, for teachers and the students themselves to know what progress they’re making each year; what their strengths and weaknesses are; and how we can all work together.

And I think all of us as parents, I don’t think we want to know every, you know, two years or three years or five years, you know, how our students are doing. We want to know in very real time. And, you know, I’m a parent of two children. I think every child has great strengths, every child has its challenges and things to work on. And having a real honest conversation about that on an ongoing basis so that we are building on those strengths and working on those weaknesses. I think that’s the right thing for kids to make sure they ultimately are not just graduating from high school that are graduating prepared for success in college.

A: We have a long way to go, but we’re so proud to have invested more resources than ever for — north of a billion dollars — in early childhood education.

That’s the best investment we can make. And we’d love to do a lot more if we can get more partners in Congress to support us on that.

We’re thrilled that high school graduation rates are up and dropout rates are down. And every category of children are doing better — we have a lot lot of work to do there.

And we’re very, very proud that we were able to put $40 billion dollars behind Pell grants on the higher education side without going back to taxpayers for a nickel. We simply stopped subsidizing banks and give that money directly to students. That was wildly controversial and and hard in Washington, but I think the rest of the nation absolutely understood that.

So we have a lot of hard work ahead of us, but at every level — early childhood, K to 12, higher ed — we’ve made real progress. The question is how do we continue to accelerate the pace of change, so that as a nation we’ll have the best-educated workforce in the world and we’ll have stronger families and stronger communities and ultimately a stronger national economy?