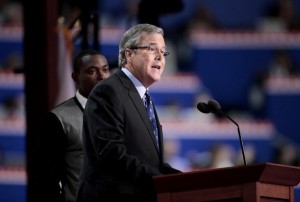 Jeb Bush, former governor of Florida, speaks at the Republican National Convention (RNC) in Tampa, Florida, U.S., on Thursday, Aug. 30, 2012. Republican presidential nominee Mitt Romney, a wealthy former business executive who served as Massachusetts governor and as a bishop in the Mormon church, is under pressure to show undecided voters more personality and emotion in his convention speech tonight, even as fiscal conservatives in his own party say he must more clearly define his plans for reining in the deficit and improving the economy.