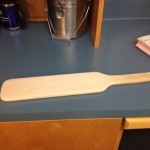 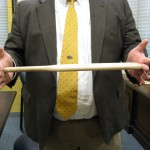 The paddle at Holmes County High school is made of ash wood. Its about 6 ounces heavy, 16 inches long, 5 inches wide, and half an inch think. 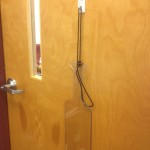 The paddle at Madison County Central elementary and middle school was made by a member in the community out of plexiglass. The paddle is about 18 inches long, 7 inches wide and a quarter of an inch thick. 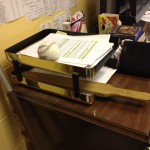 The paddle at Sneads High School in Jackson County, Fla. sits on the principal’s desk.

The late comedian Richard Pryor had a classic bit about being forced to find and strip a “decent switch” so that his grandmother could administer a “decent whippin.'”

Florida students in school districts that still use a paddle to spank misbehaving pupils know the feeling.

“You can’t buy them anywhere,” said Eddie Dixson, the school’s principal. “There’s not a market for them, so yeah, students make it.”

Dixson says the wood shop teacher gives students a wooden plank and asks them to create a handle. The teacher tells students the dimensions for the paddle and hands them a belt sander.

The paddle is light in weight. It’s about 6 ounces, 16 inches long, 5 inches wide, and half an inch thick and made of ash wood. Dixson says the school decided that was a good size.

“There’s no regulatory agency that I’m aware of,” Dixson said. “But you wouldn’t want a heavy oak type [of wood], that would not be a good thing.”

Florida is one of 19 states that allows school employees to use physical force to discipline students in school, according to the Center for Effective Discipline. The issue has gained national attention and a bill has been introduced in the U.S. Congress to ban the practice.

The state defines corporal punishment as the “moderate use of physical force or physical contact by a teacher or principal as may be necessary to maintain discipline or to enforce school rule.”

But there is no language in the statue that says where on the body students can be hit, or with which instruments, if any.

Historically schools have used a paddle to spank students on their rear-end.

Dixson has been principal at Holmes County High School for four years and he has only owned one paddle.

He says students rarely make the paddles “because they last.”

Which may make wood the better choice for a school paddle.

(You can see an interactive map of Florida school districts with corporal punishment policies here).

When the Paddle Breaks

In Madison, Fla., members of the community made the paddles out of plexiglass for Madison County Central elementary and middle school.

And because its plexiglass Rod Williams, the Dean of Students, says “it’s almost impossible to hit too hard with it.”

The school district decided schools can only give students a maximum of three licks with a paddle.

Williams said he used to make the paddles when he was in wood shop class in high school. But the school district no longer allows corporal punishment in high schools.

“There’s no regulatory agency that I’m aware of.”

The plexiglass paddle is about 18 inches long, 7 inches wide and a quarter of an inch think.

Williams says the paddle is “very flexible,” but that doesn’t mean it won’t break.

It once broke while Williams was paddling a 7th grade boy.

“He was a healthy young man and I may have been on my second [swing] and… the handle broke off,” Williams said.

It broke off after the paddle hit the student.

“You think that might scare a kid, but he turned around, he looked, he smiled and was like, ‘does that mean its over?'”