Former Gov. Ed Rendell: 'I made a mistake' on shale gas 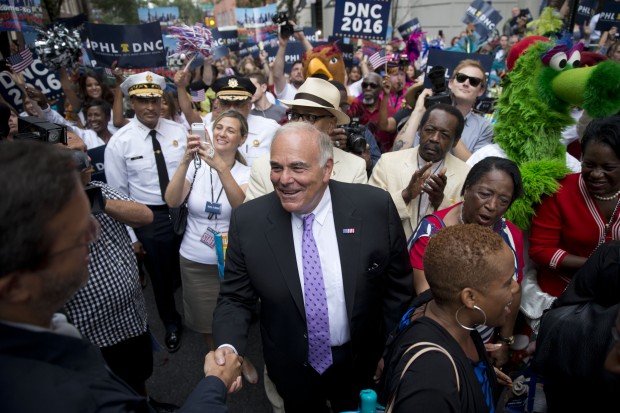 Former Pennsylvania Governor Ed Rendell, center, greets Democratic National Committee representatives in Philadelphia. At a panel discussion on Wednesday Rendell said he made a mistake prioritizing the economic benefits of shale gas ahead of environmental protection in the early days of the drilling boom.

Former Governor Ed Rendell said he regrets putting economic gain ahead of environmental protection at the start of Pennsylvania’s shale gas boom. Speaking at a DNC event hosted by Politico in Center City Philadelphia on Wednesday, Rendell said fracking has risks but those can be mitigated.
“I made a mistake in the rush to get the economic part of fracking delivered to Pennsylvania,” he said. “We didn’t regulate well construction and …. frack water as well as we should. We cured that in 2010 and we haven’t had any significant incidents since.”
Although the state did tighten regulations regarding drilling wastewater disposal into rivers and streams in 2010, some water treatment facilities were still discharging partially treated wastewater into state surface waters at the time. Pennsylvania also introduced some new well construction standards in 2010. But the state’s oil and gas law was not updated until 2012 under Rendell’s successor, Republican Governor Tom Corbett and the state still has not finalized its effort to modernize oil and gas regulations. Rendell also failed to get a shale gas tax before he left office in January, 2011. Rendell left the panel discussion without taking any questions from StateImpact.
It’s unclear what he meant by no significant incidents since 2010. The state Department of Environmental Protection maintains a list of 280 private water supplies that have been damaged by oil and gas development since 2008.
As governor, Rendell promoted the shale gas industry, leasing roughly 130,000 acres of state forest land to gas drillers. In a 2014 court case, two senior members of his administration described the intense pressure they felt to raise revenue by leasing public land.
At the panel discussion of energy issues, Rendell also said communities should be able to decide whether or not to allow fracking, something the courts have repeatedly ruled against. The Democratic Party Platform also supports fracking bans in individual communities, although not nationwide.
Rendell’s comments at the DNC appear to be a change in tone from 2013 when he penned an op-ed urging fellow Democrat, New York Governor Andrew Cuomo, to embrace fracking in his state.