Amid budget battle, royalty issue comes to the surface 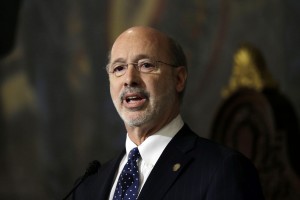 Gov. Wolf made royalty legislation part of his plan to tax the natural gas industry and raise the personal income tax.

Tucked into Gov. Wolf’s unsuccessful budget proposal last week was what looked to some like a sweetener for Republicans from oil and gas counties. It was a ban on the practice of deducting postproduction costs from royalties, an issue which has outraged many landowners in heavily-drilled areas.

Landowners have complained for years that oil and gas companies have subtracted the cost of transporting and refining natural gas from their royalty checks. In some cases, landowners have seen their checks cut by 90 percent or more because of the deductions.

Wolf’s proposal would have barred companies from deducting those costs on royalties. It was included in his plan to hike the personal income tax and levy a 3.5 percent severance tax on natural gas. It would also have limited those deductions to 15 percent of the value of the gas for the purposes of calculating a severance tax. No Republicans voted for the tax plan, which failed by a 127-73 vote.

State Rep. Garth Everett (R-Lycoming County), who represents a heavy oil and gas area in North-Central Pennsylvania, was among those Republicans who passed on the plan. He is in favor of reforming the state’s royalty laws, but didn’t think Wolf’s plan was the way to do it.

“It’s great they included it. I’m not sure if they were trying to garner votes of myself and some other legislators in our area, but it wasn’t enough to sway me to vote for the budget,” said Everett, who authored HB 1391, which guarantees mineral owners a minimum 12.5 percent, and prohibits deductions that would take royalty payments below that rate. That bill is in committee. 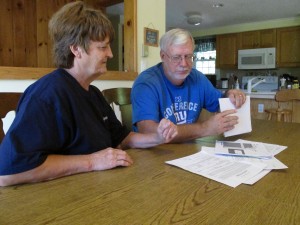 Everett said Wolf’s royalty plan wasn’t enough to put him on board with the tax increases Wolf is envisioning. Everett said he didn’t think the language in Wolf’s plan was clear enough and would have to be rewritten.

The royalty clause looked like a classic sweetener, inserted into a proposal to entice some Republicans to vote for the plan, said Dave Hess, a former secretary of the Department of Environmental Protection and a lobbyist with environmental groups like the Pennsylvania Environmental Council.

“The Governor put things in there that might be popular with some Republicans–a number of Republicans from oil and gas areas are interested in that royalty issue,” said Hess.

Wolf’s camp denies that pursuing a remedy for the state’s royalty problems had anything to do with political positioning.

“It’s to protect landowners. That’s not a political issue,” said Jeff Sheridan, a spokesman for Gov. Wolf. “Governor Wolf supports protecting landowners and will continue to look for ways to ensure gas companies are holding up their end of the agreement to pay royalties.”

Stephen Miskin, spokesman for the House GOP, said the inclusion of the royalty protections in the budget plan was inappropriate.

“This is a terribly complicated issue that is not appropriately addressed by hiding it within a bigger debate about raising taxes on working families. The governor knows there is simply is no support for his tax plan,” Miskin said. Miskin said including the royalty provisions “is just hiding from that reality. That’s no way to govern.”

In 2010 the state Supreme Court ruled that the postproduction deductions were legal, siding with the gas industry. In a unanimous decision in Kilmer v. Elexco Land Services Inc., the court also noted the legislature “is the branch of government best suited” to determine the royalty question.

But in the past five years, the legislature has failed to pass legislation, amid heavy lobbying from the oil and gas industry.

Meanwhile, landowners have continued to complain they’re being underpaid. The issue has become a particularly hot topic in the state’s busiest drilling hub – Bradford County.

Many of the royalty complaints have centered around one of the state’s biggest drillers, Oklahoma City-based Chesapeake Energy. Most of its Pennsylvania operations are in Bradford County. The company is facing hundreds of lawsuits around the country for its royalty practices in several states, and a federal inquiry by the Department of Justice.

Doug McLinko, a Republican Bradford County Commissioner, says he’s seen people in his county fighting with oil and gas companies over the practice for several years and wants the GOP-controlled legislature to act.

“This is complete bullcrap. The point is, this is no longer about an individual company. It’s about Harrisburg and the state legislature letting them get away with it. Which begs the question of why?” McLinko said.

Miskin, the House GOP spokesman, said the legislature’s options on changing the royalty rules are limited. He said changing the rules for future leases will be relatively easy, but finding a solution for the thousands of landowners who have already signed leases will be much harder.

“This is a lease issue. Both federal and state constitutional law prohibit us from making laws to change the terms of contracts,” Miskin said. “We’ve wrestled to find an agreement on how best to address current leases.”

Still, he said, he was confident the legislature would eventually revise the royalty law, it just won’t be part of a budget bargain.