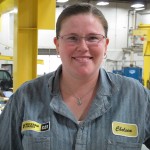 Chelsea Schulz started her college path to become a teacher, now she’s preparing for her job as a mechanic tech with Western States Equipment. 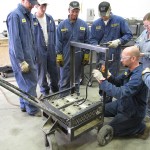 Part of the class works on a project together. 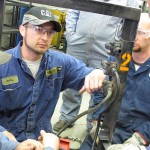 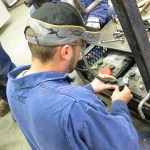 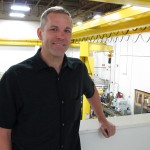 Toby Miller has worked at Western States for 18 years. He was raised on a ranch near Boise. 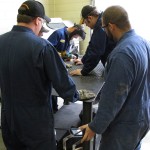 A group of CAT Academy students work on a welding project. 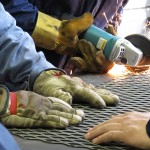 Eleven students will complete the summer session of Western States’ training program. Thirty one people have completed it in the last year. 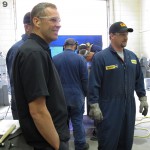 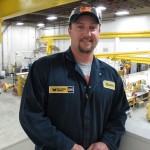 Quintin Edwards was laid off from his construction job in 2009. He plans to work in Western States’ shop near Coeur d’Alene

Even with thousands of Idahoans out of work, one Boise-based company can’t find enough employees.  Western States Equipment needs mechanic techs, jobs that by definition fall into the middle-skills category.

About half of all Idaho jobs fall into this group: jobs like mechanics, welders, police officers, or air traffic controllers.  These are jobs where you need more than a high school diploma, but less than a college degree.

According to the National Skills Coalition, not quite half of Idaho’s workers are trained for these jobs.  While many Idaho schools are ramping up efforts to train workers, the pipeline isn’t full yet, so one Idaho business has taken training into its own hands.

Chelsea Schulz never dreamed of being a mechanic.  Schulz lives in Pasco, Washington, where she started college a few years ago to become a grade school teacher.

“I love kids, but I can’t be in a classroom all day long sitting there,” she says.  “So, I ended up bouncing around on jobs, seeing what I liked doing.”

The job that really made an impression on Schulz was working at an auto shop, but she knew she wanted to do more than change tires every day.  So, she enrolled in an automotive program in Washington, and at 29 years old, Schulz graduated this summer.

“My mom and dad said ‘it took you long enough to figure it out’,” Schulz says.  “I love taking apart stuff.  Part of it is just maturity – you just figure out what you actually like doing.  Sometimes you go through dozens of jobs to figure it out.”

Schulz is exactly the kind of person Idaho-based Western States Equipment is looking for.  The company recruited Schulz and 10 other people from around the region for its paid summer-training program.

The company estimates it faces a worker shortage of 35 to 50 people over each of the next five years. That’s why the company that sells and repairs Caterpillar machines has started its own 10-week training program. Think of it like a vo-tech boot camp.

Toby Miller teaches the training program in Boise.  He’s been with Western States for 18 years, and like many of its employees, Miller comes from a ranching and mechanic background.

“Curriculum-wise it’s Caterpillar-specific,” he says.  “In that sense, they get a new experience.  But we’re also trying to instill that work ethic we expect. In that sense, it’s unique.”

“I hope I retire doing this,” says Edwards.  “I want to do this for maybe another 25 years, so I hope this is where I stay.”

Edwards, 39, is a casualty of the housing bust.  He was laid off from his construction job in 2009, and instead of waiting it out, he decided retraining was the best option.

“We’re working with software and programming and things like that now, it takes a lot of education,” Edwards says.  “I’m still learning even after taking two years of schooling, college, and now at the CAT academy I learn every day.”

Construction: The Heart of Idaho’s Recession

Edwards and Schulz say the program has been a pretty good deal for them.  Some of their housing costs are paid for by Western States while they’re living in Boise – plus they work 40 hour weeks and get paid $12 an hour.

When they graduate, the students have jobs waiting for them in their hometown or in one of Western States’ other shops spread across the west.

The company received $60,000 through the Idaho Department of Labor’s workforce training grant fund, that covers about half of the programs’ costs.

Department economist Kathryn Tacke says there will always be some occupations with more openings than people to fill them. In this case, Tacke says machinists, welders, plumbers and high-tech workers like software engineers, are the most in demand across the country, not just in Idaho.

“Manufacturing is growing in the U.S., which hasn’t happened in more than 15 years,” Tacke says. “And so, there’s a need for manufacturing skills that many people didn’t develop, because there weren’t many job openings in manufacturing for a long time.”

In the classroom at Western States, instructor Toby Miller helps students with a hands-on project.

“I think people are under the impression that mechanic jobs are for simple people or for people who don’t do well technically speaking,” Miller says.  “‘They’re good with their hands’, I hear that a lot.  And the truth is, we need both.”

Thirty-one mechanic techs will have completed Western States’ training program by the end of the summer.  All of them, are expected to jump straight into full-time jobs with the company.  The company plans to continue its training program, offering two sessions per year, for the foreseeable future.