Dick Vinson began logging at 16, when he was a high school junior in Polson, Montana. Now 75, he’s trying to start up a sawmill in Emmett, Idaho. 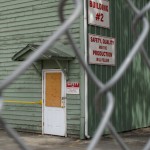 Much of the area where Boise Cascade used to operate is fenced off and boarded up. 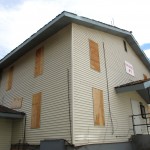 Judging by a faded sign next to its front door, this building once housed administrative offices for Boise Cascade’s local mill and beam plant. 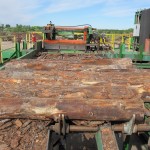 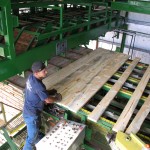 Once cut, boards are stacked according to size. 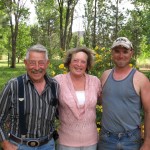 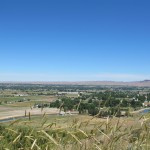 Stories about mill towns tend to go something like this: generations of families work at the local sawmill.  Then, the mill shuts down, taking hundreds of jobs with it.  Emmett, Idaho is one of those towns.  Boise Cascade closed its mill here in 2001.  But that’s not where this story ends.  Instead, it picks up with a Montana entrepreneur and millions in stimulus funding.

The expanse of ground where Boise Cascade used to operate is quiet and overgrown.  Buildings are boarded up.  A pair of quail struts across an open lot.  But on one corner of the property, there’s activity again.

There, Dick Vinson admires a massive machine called a debarker.  It’s one of the first machines logs encounter on their way through this new sawmill.  “Look at that thing working!” he exclaims.  “There’s a ring spinning around inside there.  It has six arms on it and it takes the bark off.”

Vinson is the mill’s primary owner.  He got most of the equipment here second-hand, when other mills called it quits.  In the Pacific Northwest alone, more than one hundred mills have gone out of business in the last decade.  They’ve been hit not only by the housing crash, but by pressure to upgrade and consolidate.  Still, Vinson says this mill will work.

“I believe that we’ve got it set up right, and it’s the right size, and there’s a need for it,” he says.  “When the nearest mill is 125 miles away and diesel is $4 a gallon, it’s pretty easy to figure that out.” Vinson has a lifetime of experience in the timber business.  He began logging at 16, and he’s 75 now.   What he sees in Emmett is a niche for a small mill.  He points out the town’s relative proximity to Boise, Salt Lake and Denver.  He says Canadian mills are in for trouble, because pine beetles have ravaged their timber supply.  He says this operation – Emerald Forest Products – can be profitable by next month.

“I’ve been telling my wife by my birthday, the 26 of July, I think we’ll be making a profit,” he says.  It would be a  pretty good birthday present.  “That would be great,” Vinson says.  Then, he corrects himself.  “Will be great, yeah.”

If that indicates anxiety coupled with determination, here’s why.  Vinson has mortgaged his Montana ranch and accepted $4 million in stimulus funding.  That federal money makes the mill worth a close look.  And that means going back a few years.

“If there was anyone who was going to make a go of a new mill in Idaho, it was Dick Vinson.”

That endorsement comes from former Idaho Congressman Walt Minnick.  When federal agencies were weighing where to put stimulus dollars, Minnick, a longtime timber industry executive, supported the mill without reservation.  He says no business is a safe bet, but he thought Vinson could make it work.  Plus, Minnick wanted badly to bring jobs back to Emmett, a town that was once the center of Southwest Idaho’s timber industry.

“I guess I had a soft spot in my heart for an entrepreneur as skillful as Dick Vinson who thought he could put together a mill and do it in a place that I had a strong affinity to in the middle of my congressional district,” Minnick explains.

He’s defending that now because this isn’t the first time the Emerald Forest Products mill has tried to get off the ground.  It opened in 2010, but stopped running less than a year later.  Vinson says he rushed to get started, and some equipment didn’t work right.  A family illness took him home to Montana.  Last year, he and his partners filed for bankruptcy protection.

For residents of this county where unemployment stands above 11 percent, how the mill gets up and running is less important than if, and when.  Debbie Flowers worked in Boise Cascade’s plywood plant for 11 years.  “Any kind of type of business that’ll come in and help support our town, that’s a plus!” she says.

She sits on a couch between her son, Casey Heideman, and her dad, Ray Flowers.  Together, they’re three generations of proud timber industry workers.

“I was a maintenance man, fix it man,” Ray Flowers says.  “Fixed machinery, whatever.  Weld.”

“Millwright” was Flowers’ official title.  He spent 41 years doing that job at Boise Cascade.  Now, his grandson Casey Heideman has the same position at the new mill.  Younger guys like him will take most of the 40 or so jobs Emerald Forest Products will provide.  Heideman thinks those jobs could make a big difference in Emmett, population 6,500.

“A lot of guys I know are in North Dakota working, and they’re away from their families,” he says.  “So when the mill gets going, it’ll bring a lot of guys back from working out of state and they can be home more.”

Heideman hopes a working mill will bolster local business.  He hopes that could begin a revival for his hometown, so people won’t have to take work in Boise, let alone the North Dakota oil fields.

Mill owner Dick Vinson can tick off half a dozen reasons to believe his mill will work.  Here’s one.  He has hired experienced supervisors from other mills and timber businesses that fell on hard times.  Dave Flackus was laid off last year after 20 years as a lumber buyer.  He just moved to Emmett from Oregon.

“I have seen a lot of mills go down,” Flackus says.  “You know, a lot of people lose their jobs.”

Flackus got his start at a mill in California.  “When I was running the mill in Alturas, I was the last employee,” he continues.  “I had 177 people that I had to let go.  And that – that really hurts.”  Decades later, his voice cracks at the memory.

That experience is part of why Flackus is here, in Emmett.  It feels good to be in another small town, he says, bringing jobs, instead of watching them dry up.  If he has any say about it, this mill will succeed.  “By god, I’m going to put my heart into it,” he says.  “We’re going to do everything in my power to make it work.”

Dick Vinson first got the idea to open a mill in Emmett in 2004, before the housing boom went bust, taking demand for lumber with it.  He is trying to make good on a business decision made at a completely different economic moment.  If the mill does well, that will help not only him and Emmett.  It will also be a bright spot in an industry plagued by losses.