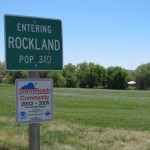 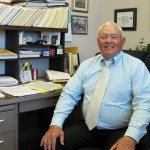 Superindendent Jim Woodworth was born in Rockland, and has spent 22 years at the helm of Rockland School. 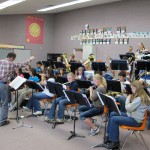 The high school band rehearses for its end-of-year concert. 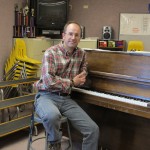 Music teacher William Lower says local people are “fundraisered out” by the constant job of raising money for the school. 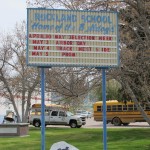 The school sign reminded the town that it was election week. 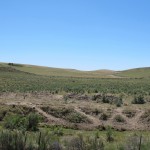 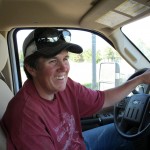 Sharee Petersen heads the Rockland School Foundation, and ranches with her dad and brother. 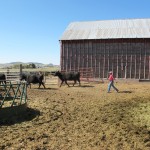 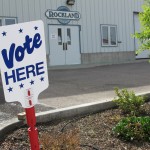 While voter turnout was low across much of Idaho, more than 40 percent of Rockland voters went to the polls. Eighty percent supported the school levy.

You might not guess it, if you happened to pass through, but tiny Rockland, Idaho, population 318, is a place of distinction.  The town has no grocery store.  Its gas station is just a couple of unmanned pumps where you pay by credit card.  But what this town does have is a school, and local people stand behind it.

Jon May was the first person to cast a ballot at Rockland City Hall last week.  It was primary day, and the local school levy was up for a vote.  I asked May if he supported it.

When public schools are short on money, they have a last resort.  They can go to voters, like May, and ask them to pay extra.  As state funding for Idaho schools has dropped, many districts have done just that.  But there’s a hitch.  Levies can lead to unequal tax burdens and disparate funding levels for students.

In Rockland, May is in good company.  While some districts have trouble getting voters to support school levies, in this town, the levy is a shoe-in.  It never fails, even though people in this district pay the highest rate in the state.

There’s little Rockland School Superintendent Jim Woodworth likes more than showing off the school — the classrooms, the new gym, the playground.  He gestures, proudly.  “The grass and everything out here we put in ourselves,” he says.

The school isn’t fancy, but local people have had a hand in all of it.  The grass on the playground, put in by volunteers, is the smallest example.  Woodworth gives another: the school building.  Local farmers and ranchers excavated the site themselves.  “They brought their trucks and tractors, and we spent one whole summer moving dirt and hauling gravel,” he says.  “We saved close to $250,000 just by doing the excavation for the building ourselves.”

That was years ago.  Recently, Rockland residents got together to paint the new gym.  Woodworth has lined up volunteers to repair a tennis court this summer.  All told, he estimates the school has saved half a million dollars.  They need every penny.  This district has seen a 20 percent decline in state funding in the last three years, according to figures from the state Department of Education.

It’s a reality Woodworth absorbs with the calmness you’d expect of a small-town superintendent who wears Wranglers to work and ranches on the side.  “You know, sometimes you get a little upset, because you think, ‘Well, you know, you guys could be doing more for us.  You could be helping us out a little more.’  And yet, when it’s handed down to us, we just take it and go with it,” he says.  “I mean, that’s all we can do.”

And when what’s handed down is less money, the school has to ask taxpayers for more.

Sharee Petersen is in the middle of a busy day, loading cows and calves into a truck on a ranch outside of town. She points to the line of them, plodding past. “The calves were born January, February, March.  We start calving the end of January,” she says.  Then she moves off quickly, whistling and calling, herding them toward the open gates.

If there’s anyone who understands the school’s tight budget and the pressure it puts on local people, it’s Petersen.  She grew up in Rockland and ranches with her dad and brother.  She also heads the local school foundation.  Her kids are three of the 167 who attend Rockland School, K-12.

Later, Petersen tells me the tough thing about the school levy is that it falls to farm and ranch families like hers to pay the largest share.  “We don’t have a lot of booming businesses out here.  We have a lot of grazing land.  We don’t have Simplot or Lamb Weston out here to help – help with our tax base,” she says. “So we have to rely on the farmers, and that’s a bad deal!”

According to the county assessor’s office, the largest farms and ranches in this district pay about $5,000 toward the school levy each year.

Here’s the hard situation for Rockland: it has some of the lowest property values in the state.  In order to raise the extra $210,000 their school needs to get by, taxpayers here agree to a levy rate that is 17 times the rate paid in one of the state’s wealthiest school districts.  Mike Ferguson of the Idaho Center for Fiscal Policy says that might go against the state constitution.  “Property taxes are supposed to be levied uniformly,” he says. “And by having the districts with levies all across the board, some at zero, some at relatively high rates, that’s not uniform property taxation.”

Ferguson says unequal taxation is only part of the problem.  The other issue is that education funding can vary dramatically, depending on a district’s property values.  That’s potentially bad for students.  “Depending on which district a student lives in, they may get zip from a supplemental levy, or they may get a lot,” Ferguson observes. “That has a direct bearing on the quality of the education that they will receive.”

All of this plays out in Rockland.

At the end of the school day, music teacher William Lower leads the high school band in one of its last practices before the end-of-year concert.  They’re taking an exuberant but slightly shaky run through “Wade in the Water.”

“Stop!” Lower calls out.  “Measure 47, did any of my flutes play an E flat?” he asks.  From the front row, a flautist acknowledges that they all might have messed up.  “Yeah, it sounded like all of you!” Lower says cheerfully, picking the piece up where they left off.

People in Rockland are proud of their school, and rightfully so.  It’s the heart of their community. They’ve volunteered and paid extra to support it.  But Lower says that strategy has its limits. “If you keep volunteering to do things, people will begin to expect you to simply volunteer all the time,” he says.

In spite of this community’s dedication, Rockland School has cut back.  It has gone to a four-day school week.  Textbooks aren’t updated as often as they used to be.  Teachers haven’t had raises in years.  Local people say they’ll weather all this.  If the school goes under, the town goes under, they say.  And they’re determined to keep both afloat.