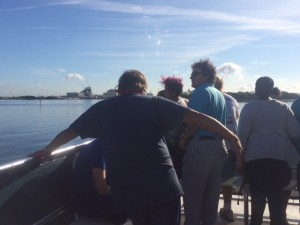 Florida is a state that juts out into the water and is home to 14 ports — but still the maritime industry is a mystery to most teens. Now, a rapidly aging workforce in one of the state’s major economic engines is behind a push to reach a younger generation and teach them about sea-going jobs.

In Tampa Bay, maritime interests have teamed up with the Hillsborough School district to create the Maritime Honors Academy at Jefferson High School In Tampa. On a recent morning, 31 students from the the Academy’s freshman class took a tour of the Tampa port. They were welcomed by Port Tampa Bay President and CEO Paul Anderson, who told them “this program is a great way for you to learn about an industry that’s global, and has a great future for many of you, hopefully.

“There’s a lot of people here that, when you graduate, we won’t be working here any more,” Anderson said. “We’re going to be retired.”

And that, he told the students, means job opportunities for you.

Fourteen year old Alexia Hegedus says she’s interested in those jobs. She says she found out something in the program that amazed her. “Ninety-five percent of the world’s goods are traded through ships,” she says.  “It’s a very interesting subject, and I’ve always loved the ocean.”

Our conversation is interrupted when the tour guide points out dolphins, and the students rush to look over the side of the boat.

The dolphins get a bigger response than anything else on the port tour, which I mention to the Maritime program director, John Paradis.

“Eighty percent of [Academy freshmen] want to come in and pet a dolphin,” Paradis says. “The market is flooded with marine biologists, and the pay scale is not as high as it is on the maritime industry side.”

Paradis says that when their eyes are opened to the larger world of shipping, they leave the dolphins behind. The upperclassmen say they want to be naval architects, or ship captains. One junior says her goal is Paul Anderson’s job — CEO of Port Tampa Bay.

As the boat passes through the Ybor Channel, the tour guide points out International Ship Repair, whose President, Dave Sessums, was the driving force behind this Maritime Academy. Sessums is a member of the Tampa port’s Propeller Club, a group that promotes shipping and maritime interests. Working on the Propeller Club’s outreach and education committee, he partnered with the Hillsborough School District to create the program. Sessums says he started out in the shipping industry at age 12, and nearly six decades later, says he feels compelled to draw new blood into the industry.

“You can’t just walk away and let it wither on the vine,” he says.

Sessums says when they created the program eight years ago, they wanted a broader focus of study than they saw at established schools in Florida, such as MAST academy in Key Biscayne, which focuses more on the yachting industry and marine science. With 16 fields of study, they introduce students to the array of possibilities of maritime work

“Those jobs are everything from a welder to a naval architect,” he says. “From a terminal operator to a tugboat captain. There are a lot of careers that most people don’t know about. And we’re getting old.”

Now Propeller clubs in Broward and Brevard county are working with school districts to set up similar maritime programs there.  Last May, the first students graduated from Hillsborough’s other maritime program, at Blake High School. Out of nine graduates, three went to merchant marine academies, and two more work at shipyard trades.

Sessums says he heard a speaker recently — Congressman Elijah Cummings — who summed it up:

And that’s the magic of it, Sessums says. For the Maritime Academy freshmen on the boat tour, the hope is that seeing will lead to dreaming.