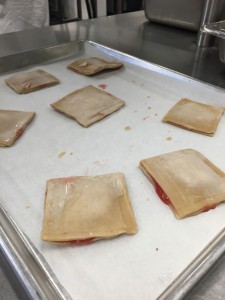 A tray of guavalitos before baking. The breakfast treats are locally-made in Miami-Dade County and have just 100 calories.

For the first time in decades, the majority of U.S. school children come from low-income families.

Florida has one of the highest rates in the country — federal data shows just seven states have a higher percentage of low-income students.

That means more students qualify for — and depend on — free meals provided by school districts. And meal service is now a year-round job instead of just when school is in session.

In Miami-Dade County schools, those meals starts in the district’s test kitchen, where Donna Drummond demonstrates how she makes spinach lasagna, a new addition to menus this year.

She ladles sauce into a pan. Then she places the frozen lasagna rolls — made with whole grain pasta and mozzarella cheese — into the pan.

The dish is designed to be easy and quick to make for hundreds of students. It comes with a salad and a breadstick spiked with low-fat mozzarella cheese.

These new choices are part of a menu this year featuring more vegetarian options.

The district was adding fruit and vegetables years before the federal government said it had to. It’s been seven years since Miami-Dade schools has served a hot dog. 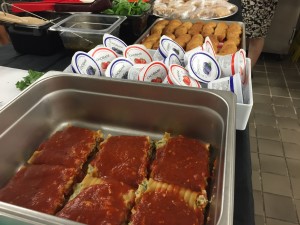 Some of the new choices on Miami-Dade school menus this year: Spinach lasagna, Greek yogurt and the guavalito.

Every item is screened for ingredients — no high-fructose corn syrup, MSG or added trans fat — and then given a test run in the district kitchen.

District food director Penny Parham is in charge of what kids eat at school.

“All year… we listen to what our students say,” she said. “We do focus groups with our students. And we also, you know, follow the food trends.”

More students also depend on schools for meals than ever before. Fifty-nine percent of Florida students qualify for free or reduced-price school meals. In some schools, nearly every student qualifies.

Even during summer break, schools are serving meals. Most big districts around the country now keep kitchens open, and even deliver meals to camps.

The Florida Department of Agriculture even has a website to find the closest place serving summer meals.

“Yeah, we never stop,” Parham said. “We were serving lunches on June 8, which I think was the Monday after the last day of school.” 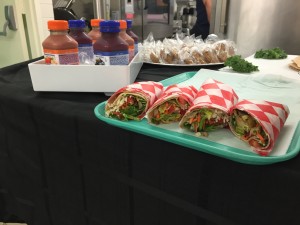 Miami-Dade schools are adding veggie wraps to the menu, and students can also grab Naked juice.

Farm-to-table has been a restaurant trend for years, but schools are also trying to serve locally grown produce.

When Florida crops have bumper years, that means bargains for the district.

“In February, there happened to be really great prices on strawberries for a short period of time,” Parham said. “And we actually gave students fresh strawberries at breakfast right before spring break.”

Parham said students will eat vegetables if you serve them right. Instead of steaming them, maybe shred them, so students can add them to a sandwich.

“We really want to serve our Florida produce, and we want to serve stuff that’s even closer – here in Miami-Dade, if possible,” she said. “We have green beans and corn that come straight from a farm that’s up by Lake Okeechobee.”

Allen said healthier meals are good for business. Schools make up about 5 percent of his total sales. But because they’re serving meals year-round, he’s been able to add permanent jobs growing and packing crops.

“Most of the time the kids are eating the product within three to four days from harvest,” Allen said. 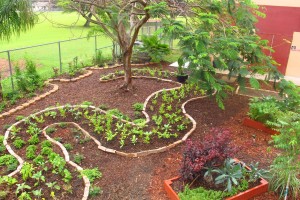 Allen also brings corn and bean plants to schools to teach kids how food is grown and harvested. That’s just one way schools have helped kids have a personal stake in what they eat.

For instance, students at 11 Miami-Dade elementary schools are growing kale, tomatoes passion fruit and other produce in what’s been dubbed “food forests.”

Adults do a lot of thinking and planning for school food, but Miami-Dade menu supervisor Susan Rothstein said students have their own tastes. She trusts cafeteria managers to know what their students want to eat.