So far, all but three Florida colleges are raising tuition this fall.

Students from around the state suspected this would happen.

That’s why they “occupied the Capitol” during the Legislative Session earlier this year to protest the tuition hikes they saw coming miles away. 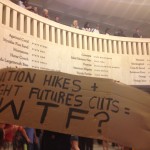 Lawmakers and lobbyists look down from the second floor on the state Capitol building as students protest higher education cuts and tuition increases. 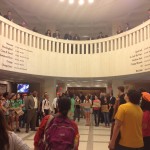 Students occupied the Capitol chanting, “They say cut back, we say fight back.” State representative Dwight Bullard (D-Miami), center, jumped in chanting to let the students know they have a friend in the legislature. “I support more funding for education, so the same issues they’re fighting for, its easy for me to stand with them,” Bullard said. “I love seeing youth energy getting involved in government because often times its too many blue jackets and khaki pants walking around this place.” 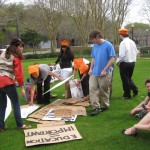 Florida students meet outside of the Capitol in Tallahassee to distribute signs before they Occupy the Capitol to protest tuition increases and cuts to higher education funding and scholarship programs. 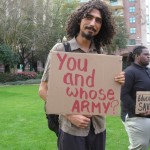 Ralph Wilson, a PHD students in mathematics at Florida State University, gets his tuition paid through a research assistantship. “I have it great compared to a lot of the undergraduates or high school students who are about to start their educations here in Florida because the tuition is seeming like its going to continue increasing every year,” Wilson said. “These are my colleagues, these are my friends. And if something is going to threaten their livelihood, I absolutely take offense.” 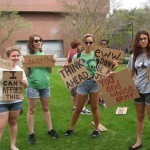 Florida State University junior Cherry Smith, freshman Elizabeth McCawley and Lissa Reed, and senior Gladys Nobriga. Nobriga acknowledges Florida has some of the cheapest tuition rates in the country. “They’re saying they want to raise it closer to national averages, but that’s always rising also,” Nobriga said. “Its not fair that we don’t get the same education rate that they may have gotten.”

The board of trustees at Palm Beach State voted Wednesday to keep tuition for two-year degrees at the same rate as last year.

But students will pay $2.25 more per credit hour in school fees.

A full-time Palm Beach State student will pay $2,948 a semester for 15 credit hours, which is an increase of about $67 from last year.

Students taking four-year degree programs, however, will see their tuition and fees increase by 6.9 percent.

The Broward College board of trustees voted on Tuesday to keep tuition flat.

But students will have to pay $2 more per credit hour in capital improvement fees.

A full-time Broward College student working toward an associates degree will pay $3,117 this fall, which is an increase of $60 from last year.