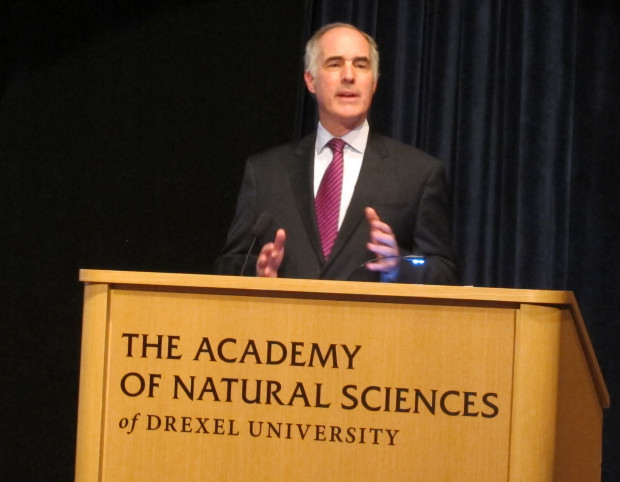 Pennsylvania’s Democratic U.S. Senator Bob Casey is encouraging more people to get out in the streets and march against the policies of newly elected President Donald Trump. Casey spoke to a packed house Thursday night about climate change at the Academy of Natural Sciences.

Topping off a day of protests in Philadelphia that accompanied a visit by President Trump, Senator Casey told a gathering of more than 400 people in downtown Philadelphia to keep up the pressure.

“I haven’t seen this kind of intensity on a range of issues in a very long time, if ever,” said Casey. This is encouraging …not even a week into the administration.”

Casey spoke as part of a panel on climate change where he criticized Trump’s nominee for EPA administrator Scott Pruitt as “hostile to the Clean Air Act.” Casey told the crowd he and his fellow Democrats are planning to filibuster, delaying a vote on Pruitt. As Oklahoma Attorney General, Pruitt made a career out of suing the EPA.

“We’re going to use those hours to debate, to go to the floor, and make the case,” Casey said.

Although Pruitt is expected to be confirmed, Casey said it’s important to voice opposition.

Pruitt has strong ties to the oil and gas industry and has admitted to raising funds for an oil and gas super PAC. Although Pruitt does not completely deny human-caused climate change, he criticized federal air and water protections during his confirmation hearings.

Casey said the recent activism, including the women’s march last weekend had a big impact on his Senate colleagues.

“There’s a palpable intensity now that wasn’t there before, I think that everyone of us is seeing a lot of growth in terms of the number of people contacting us.”

During a question and answer session, Casey was asked to join activists who stage a weekly protest at Republican Senator Pat Toomey’s office, but he demurred. “I don’t think you need me to go to his office,” he said.